Uncategorized
Bachelorette and an Easy Night In

Today, we fit helmets at a 4-H fair, which is an organization for youth focusing on Heart, Hands, Head, and Health.  The kids taught me that today.  Many of the children show animals such as rabbits, chickens, roosters, cows, and pigs.  I will say that this was probably the most interesting location we were at.  The animals were making their noises in the background, kids were playing sack races in a pen nearby, and here we were fitting bicycle helmets.  It is crazy to think that this area was just a two hour drive away, yet it seemed like a different world.  All of the bicycle-helmet fitters were chatting about how we wonder if we would have turned out differently if we had been raised in an environment like this.  Who knows!? Interesting to say the least 🙂

When I arrived home (well the home I am dog-sitting at) Brian and I were both hungry for dinner. We decided on Zucchini Shrimp Barley Risotto.  I had been eyeing this recipe for a while, and tonight was the night to try it out…it was amazing! 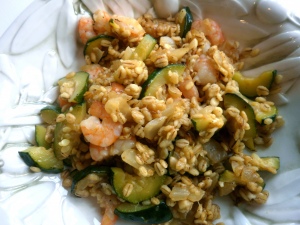 Preparation:
Begin by bringing the broth to boil.  Leave on the stove to simmer and keep warm.  Heat oil in large nonstick skillet over medium high heat.  Heat the zucchini and onion in the oil for about 5 minutes until soft, stirring frequently.  Add the barley and cook for 1 minute stirring frequently. Stir in 1/2 cup of the broth, cook 5 minutes until liquid is nearly soaked up.  Stir in 1/4 cup broth and salt.  Add remaining broth, 1/4 cup at a time, stirring between each round until completely absorbed before adding the next batch.  Add the shrimp and cook for about 4 minutes.  Stir in cheese, margarine, and pepper.
We rounded out this meal with a nice and crisp side salad…it was a perfect summer meal
Bella
After dinner, Brian and I took Bella on her nightly walk.  We are absolutely in love with all of the houses in the area and this cute neighborhood.  All of the houses are so old and have so much character, it is definitely not the ‘burbs.  This location is also close to a lot of great restaurants, little shops, and the monon which is great for walking, running, and biking on. 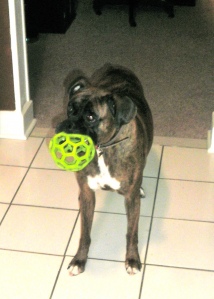 Bella is obsessed with this ball.  Literally, it is the only thing she plays with.  She will just bring it out, and if we don’t notice right away she will start to wimper a little.  All we have to do is throw the ball, not even far, she will chase it and bring it back and she is perfectly content!  What a cutie 🙂 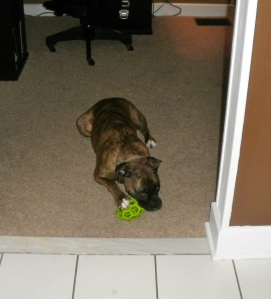 Now, we are watching the bachelorette and just chilling out for the night!