Hello from Fort Fun!  (that would be my hometown of Fort Wayne).

About a week ago, I went to a young professionals event and met some really great people.  There were a couple of awkward silences…but that just happens sometimes I guess.  Making small talk, someone asked where I was from and I replied that I was originally from Fort Wayne.  He then went on to ask if I called my hometown anything else…???  I thought that was a strange question.  Do you have multiple names for your hometown?  He then told me that he had heard it called Fort Fun and wondered if it was true.  While I think Fort Wayne is a great place to raise a family, I think the nickname “Fort Fun” is more of a joke rather than a serious nickname…but I could be wrong.

After coming home from the gym, I sent out another job application, responded to some e-mails, then headed out for a 3 mile run and the next thing I knew I had to shower, pack, and get ready to head to “Fort Fun.”

I quickly whipped up a salad using the rest of the baked tofu and some chopped veggies topped with a salsa and hummus mixture.  It was delicious! 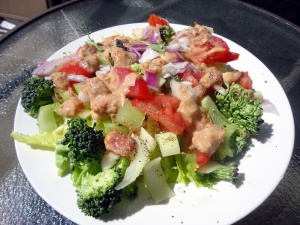 With food in my belly, I then headed out to a meeting about volunteering for a local arts organization before I officially hit the road.  Although the drive home is only two hours…sometimes it is a long two hours.  Today, the drive was long.  I was thankful to finally pull into the driveway of my parent’s home-sweet-home.

As soon as I got there, Mom and I got changed into some workout gear so that we could head to one of my mom’s favorite group fitness classes, BodyCombat.  BodyCombat is a Les Mills exercise program that is pre-choreographed to music much like BodyPump and RPM.  It is a “high intensity martial arts inspired cardio program” that lasts 55-60 minutes.  It was my first time taking the class, but I have to say that I LOVED it!  My mom and I both agree that this workout is very empowering and makes you feel like you could use the punches, kicks, and ducks in an actual fight…although I probably won’t risk trying it 😉  Some of the footwork was a little bit “fancy,” but I can imagine that after attending a couple of different classes and getting used to the format things would get easier.

After our sweaty workout class, Mom and I were more than ready for dinner.  Mom had purchased a new (to us) fish called Swai.  I had never heard of it and neither had Mom, but it was on sale at the store so Mom thought she would give it a try.  What  a good decision!  It had a mild flavor, was nice and sturdy (it didn’t fall apart as Mom was cooking it), and tasted great with some taco style seasonings that Mom put on the fish. 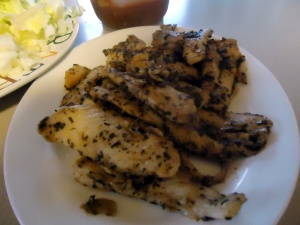 I put my fish on top of some lettuce with onions, mini sweet peppers, and avocado with salsa.  Mom put her fish along with some veggies in a soft taco shell with some cheese.  We both agreed that it was delicious! 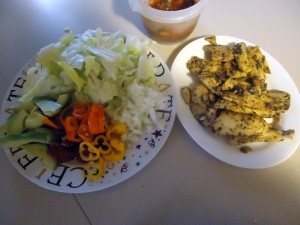 Mom also had a little surprise for me when I got home…a free sample of coffee for the Keurig!  Gotta love a free sample 😉 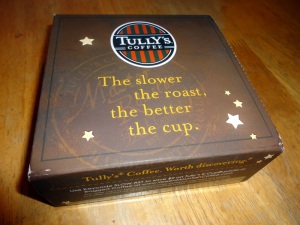 Now, we are watching Mom’s new favorite show, the New Girl.  I have heard a lot of good things about it, but never taken the time to sit down and watch it.  So far, I like what I see!

Have a great evening!