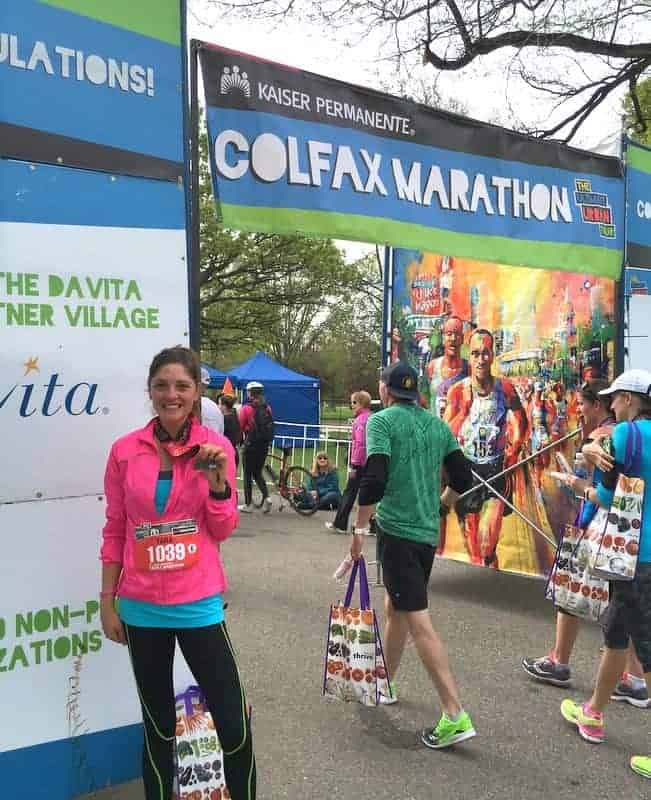 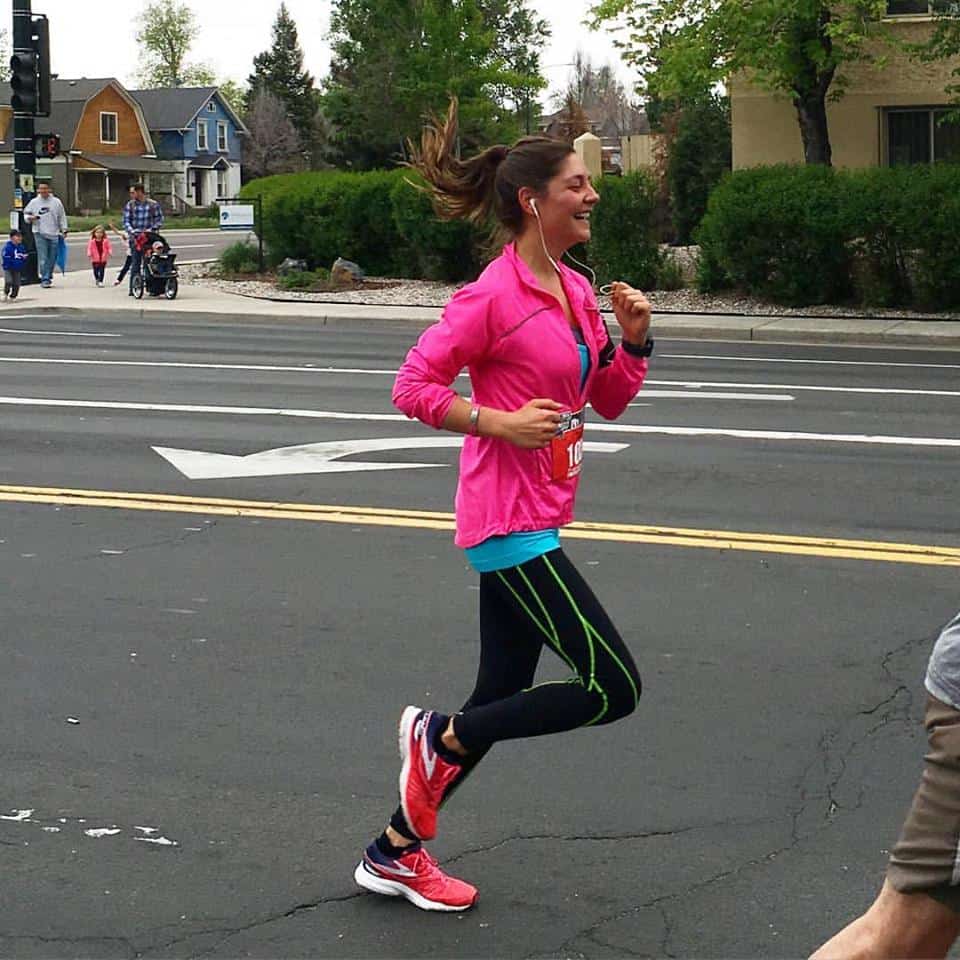 Last weekend, I completed my 7th half marathon when I crossed the finish line of the Colfax Half Marathon.

Now for my recap of the overall race and race experience! 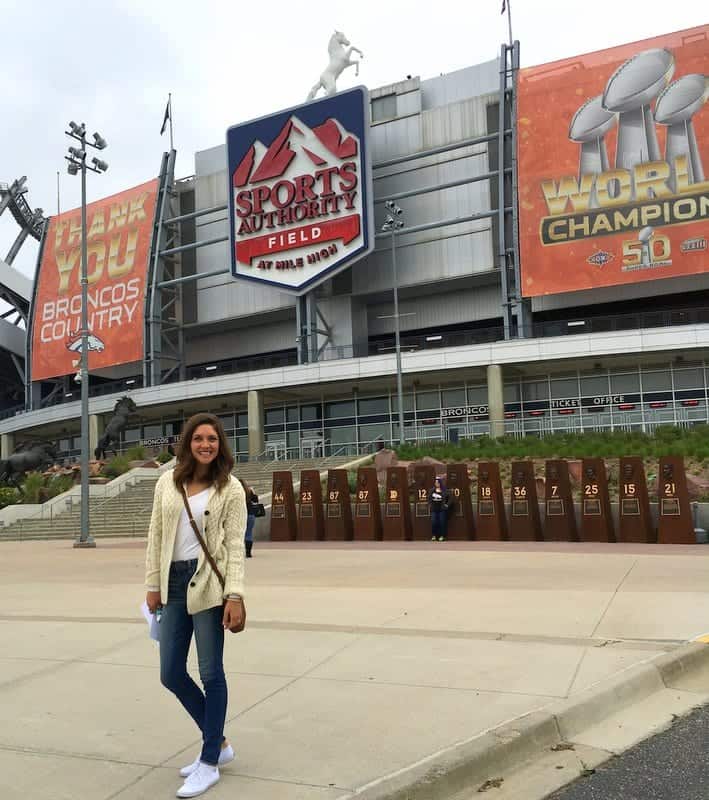 If you follow me on Snapchat (username: trebleinthekchn) you probably saw some of the expo highlights! I visited the race expo on Saturday afternoon at Sports Authority Field, which is where the Broncos play.  We were able to go out into the stadium, which was really neat especially since it was empty! 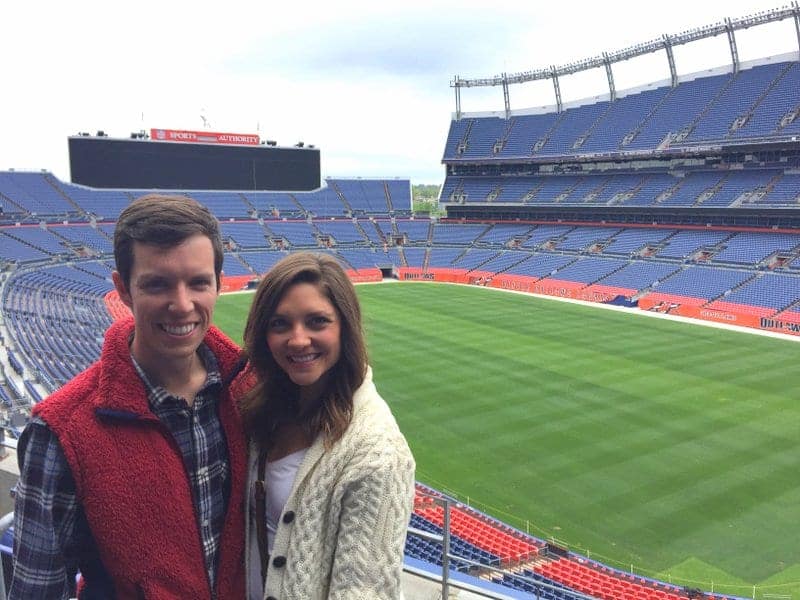 While it was really cool to see the stadium, I’ll be honest in saying that this expo was good, but it was definitely not my favorite.  It was VERY dark, which is why I don’t have any pictures for you, and it was also very windy.   I prefer to have an expo in a bright and open space so that if I want to revisit a booth or go out of order to avoid crowds, I have that option.  While I was at the expo, I picked up my bib, my race t-shirt, and I purchased a Nathan iPhone SuperSonic Armband for a discounted price (which is about the same as what you can find on Amazon).  So, like I said, it was a GOOD expo, just not my fav.

Brian and I then ran some errands and I finally came home to relax in the bath for a bit, make a dinner of grilled chicken, roasted vegetables, and homemade biscuits, and we watch part of a movie.  I made sure to get into bed around 9pm! 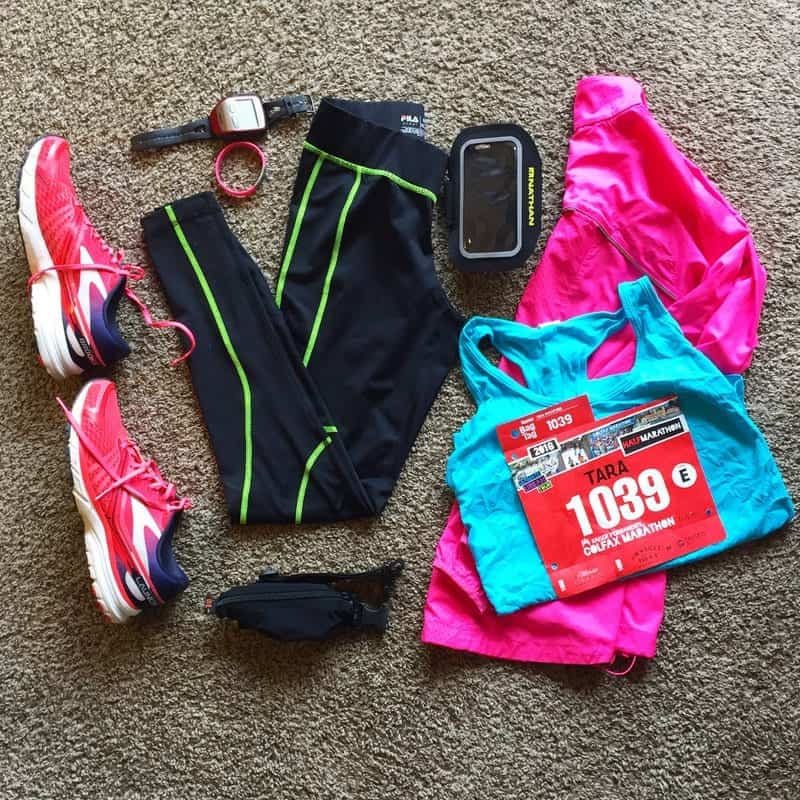 I laid out all my supplies the night before so that everything was grab and go in the morning.  After a good night’s sleep, I started my morning just like normal.  Glass of water, coffee, and oatmeal with banana, egg white, and peanut butter.  I really didn’t feel SUPER hungry, but it was a few hours before the race was starting and I knew that I would be thankful to have breakfast under my belt before the race.  The Colfax Marathon web site was a bit confusing because it didn’t include any information about WHERE to park.  It only stated what time people needed to be parked by.  The starting line was about a mile and half from my apartment, but I didn’t know what time I needed to be there and ready, how long the lines would be at the porta-potty, etc. So we left the house around 5am and drove to a street just outside of the park. That way, I was close to the race and could wait in the warm car rather than out in the cold.

The half marathon started at 6:45am, but the marathon was starting at 5:45am so we left the car to walk to the starting line around 5:45am.  There are a ton of street closures with this race and we parked on the opposite side of one of the street closures, and I didn’t want to get stuck waiting to cross the street to get to the start line for marathoners to run, so we walked over super early.  Luckily, there were TONS of porta-potties and tons of other racers arriving for the half marathon around the same time.

I had time to make sure everything was in it’s place and relax a bit before starting. 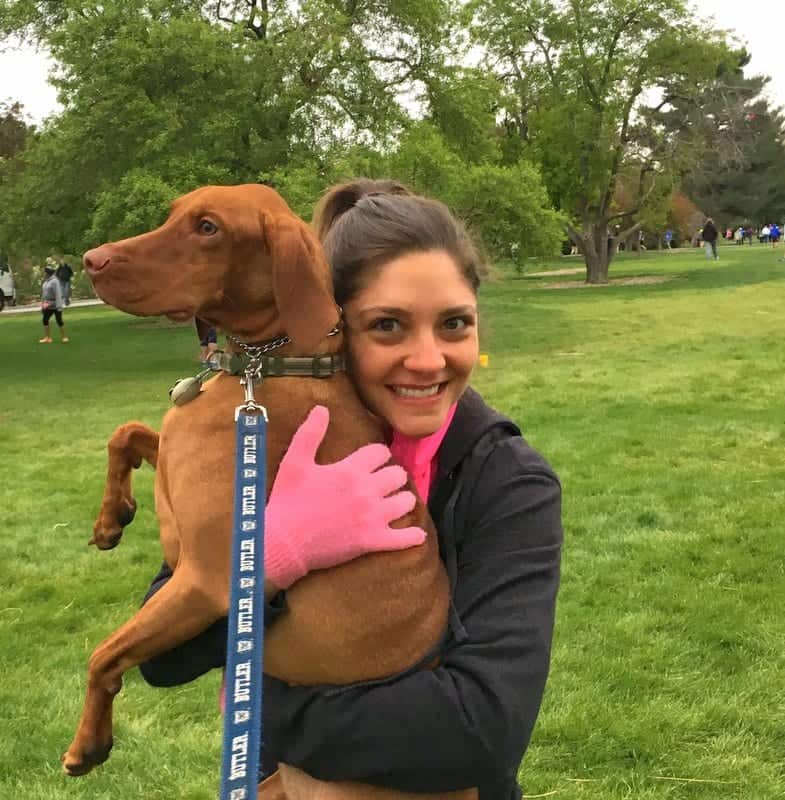 Brian brought Bernie and the other Vizsla we were dog sitting, which was really fun!  I loved having the pups there to cheer me on.  Once, I was officially ready to get lined up, I shed a layer of clothing and said thanks to my training partner (Bernie).

I was ready to run! 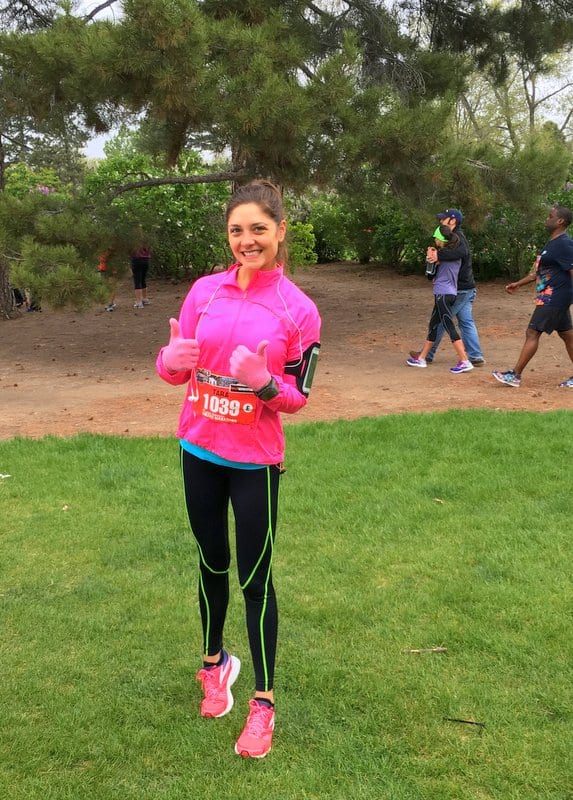 I lined up in the front of my corral.  When I initially started training for this race, I really wanted to PR (sub 1:44).  As I completed my training, it was REALLY hard for me to gain speed on my long runs.  I think it had to do with the fact that I was running alone (no other humans), Bernie was running with me which was a completely new-to-me element, and I also didn’t run with music because I was running with a dog.  Because of this, I ran all of my longer runs at about 9 minutes or 9:30 pace.  Even still, I felt really good on race day and thought it was realistic to run a sub 1:50 pace.  It would have been a dream to do 1:45, but I thought it would be a bit of a stretch.

I ran the first 6 miles with about a 7:53 pace because I was following a girl at a consistent pace very closely.

That pace was very fast for me, and I was really pushing myself so I knew that pace wasn’t sustainable for the last 6 miles.  After mile 6, I fell back and stopped following that girl and I ended up finishing with a 8:16 pace and an overall time of 1:48:29. 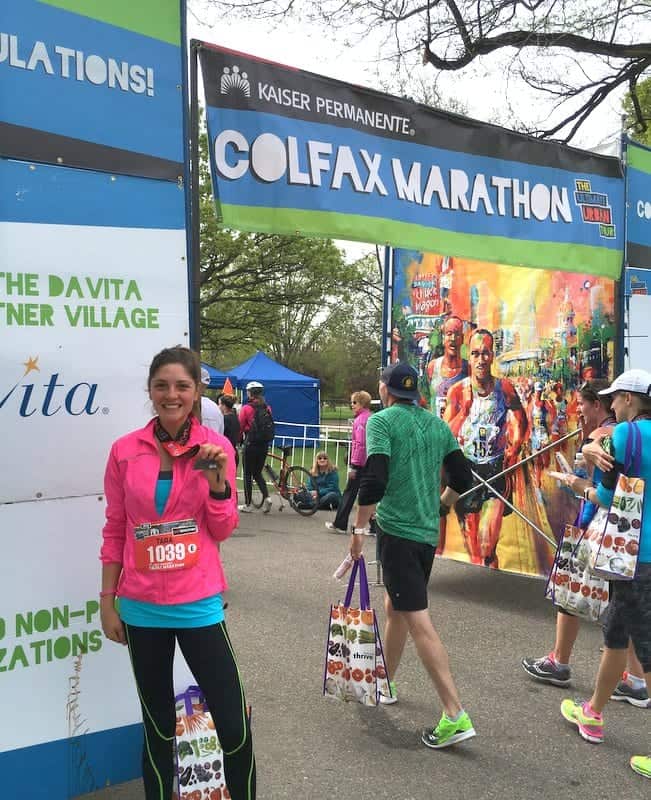 After the race, I joined up with Brian and our friend John (who got 10th place overall in the half marathon!!) so that we could get some post-race snacks and walk around to visit all of the tents. 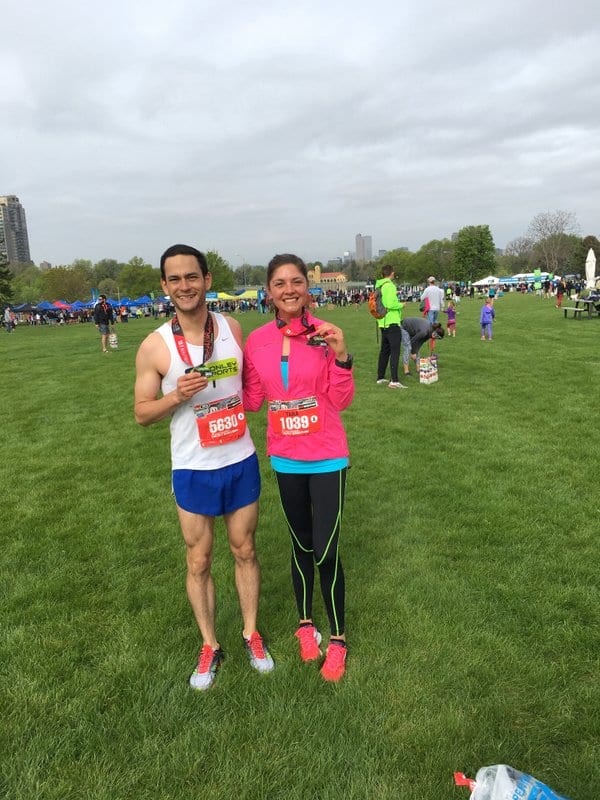 After walking around for a bit, Brian and I headed home to shower up and then we noshed on Chipotle for lunch 🙂  I totally spent the rest of the day relaxing, which was really nice because it’s something I rarely do.

Overall, this was definitely a larger-scale urban race, which is my favorite kind! I love being able to explore cities on foot and I have found that by running in races I get to see parts of town I never knew existed.

Thanks to everyone who followed along with all of my training runs.  I truly appreciate the support and encouragement!!