Dinner tonight was another fall favorite featuring another appearance of Spaghetti Squash!

I simply cooked it using this method, scraped the insides, mixed it with steamed broccoli and topped it with marinara sauce mixed with some of my homemade hummus, and olives! 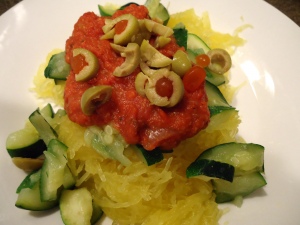 The olives were kind of a spur of the moment addition.  I love olives on my pizza, and I thought that “spaghetti” has similar flavors so why not try them mixed with that?  It was a good decision!

After dinner, Brian and I headed to his volleyball game…which he won making his team undefeated!  😉

Ok, so I have mentioned before that I LOVE all things fall and all things pumpkin….except one thing.  Pumpkin beer.

I have just never been a beer girl, and it seems like this season I am seeing pumpkin beer on almost every blog, every grocery store aisle, and in many restaurants.

Now, I have always thought I would never like beer until I tried….lambic.  It is a fruit beer apparently, but literally tastes NOTHING like beer…aka it is my cup of tea.

Brian and my friends Cassie and Devon came over on Sunday night to share this little treat with me swearing that I would like it, and they were so right! 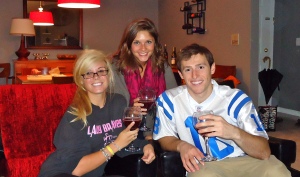 It even comes in a fancy schmancy bottle that looks like champagne.   What more could I ask for!?

Ok!  Off to bed now and to watch Bridesmaids with Brian 🙂