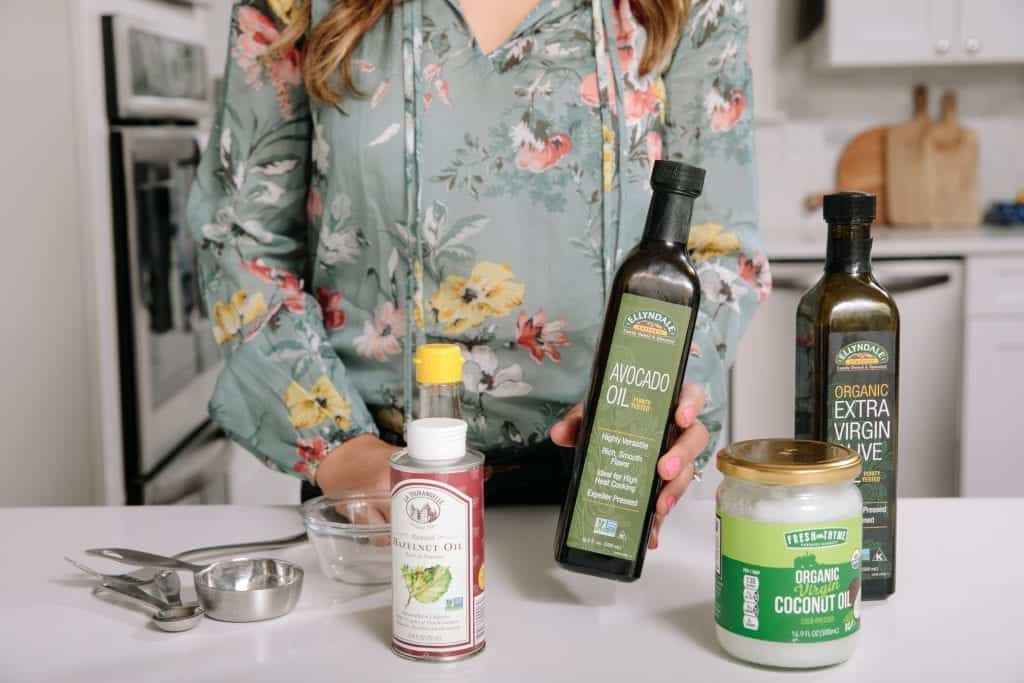 A guide to healthy cooking oil including definitions, nutrition information, and tips for how to consume healthy and nutritious oil.

Last week, I was lucky enough to attend a local event with the California Olive Oil Commission.

We learned all about olive oil, discussed current research about the health benefits of olive oil, learned how to taste olive oil, and sampled delicious California olive oil. This event was SO timely because I was planning on writing this Guide to Healthy Cooking Oils to answer a reader question: “how do I know what kind of oil is healthy and nutritious?” and I was able to use some of the information I learned! 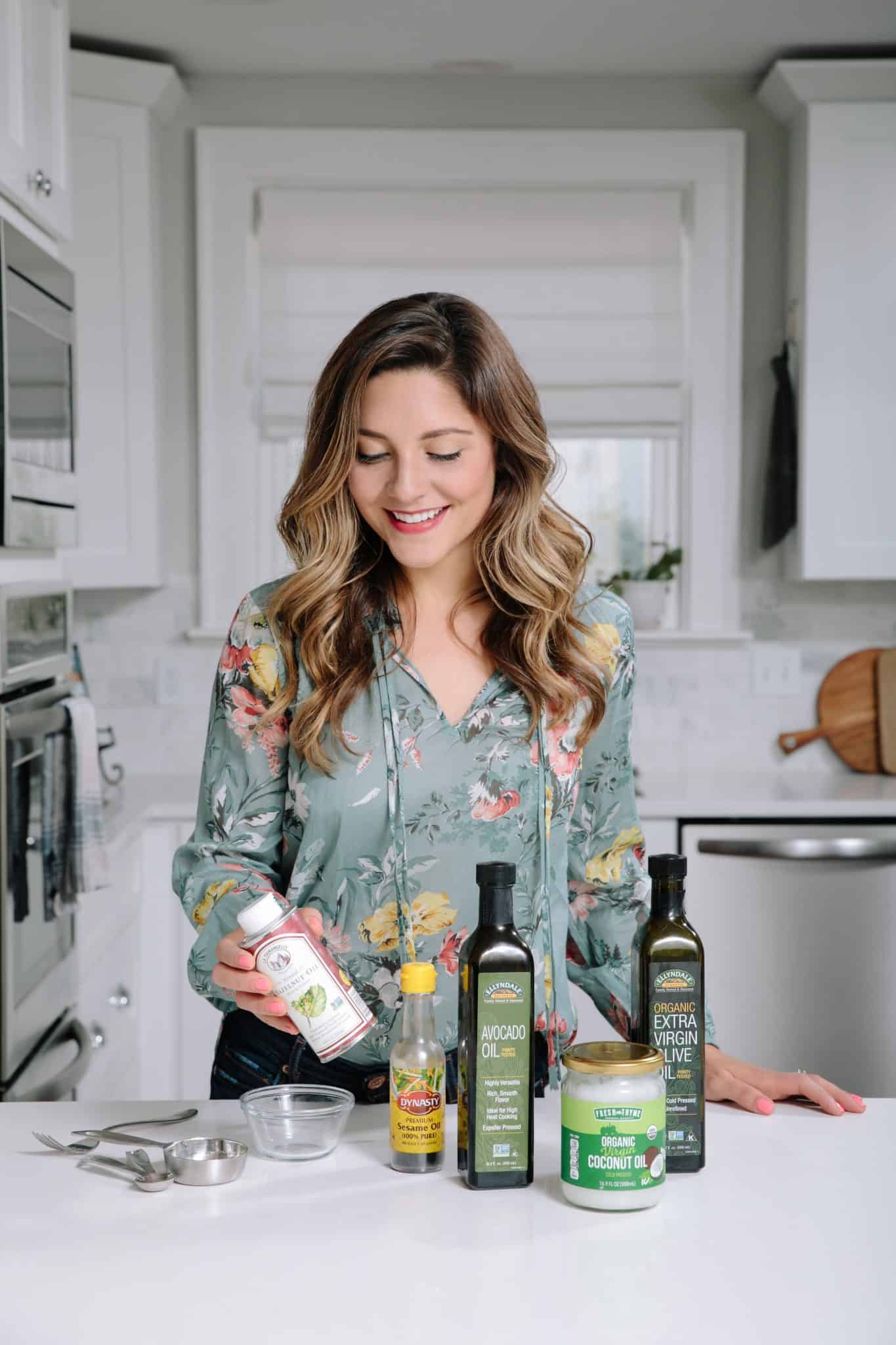 What are refined oils?

When shopping for oils you may notice the terms “refined” or “unrefined” on the bottles at your store. These terms have to do with the process used to extract the oil from the original source (the olive, the sunflower seed, the coconut, etc). There are several ways to extract the oil, but many times the oil is extracted by either crushing or pressing the plant or by using chemical solvents or heat/steam processes to remove the oil.

Refined oils often have a more neutral flavor because many of the small pieces of the original plant the oil came from are filtered out. 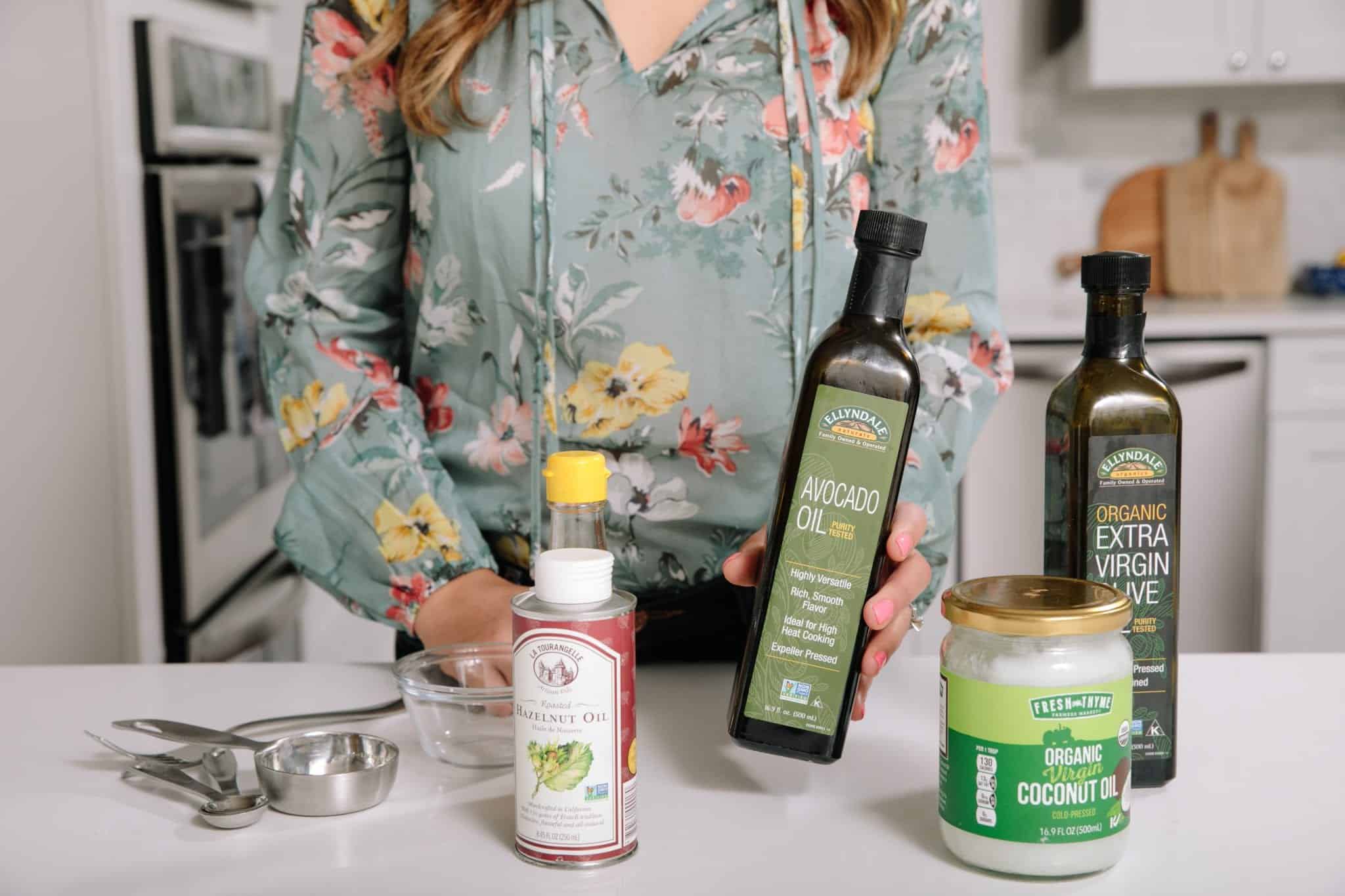 What does expeller pressed mean?

Expeller pressed is a mechanical way of extracting oil from an original source. The source (olive, coconut, etc) is squeezed in a machine under high pressure. With some ingredients that are harder and require more pressure, the press/machine heats up due to friction.

What does cold-pressed mean?

Cold-pressed oils are extracted in a method similar to expeller pressed, but the process undergoes temperature control. The thought is that exposing the oil to a higher temperature may alter the nutrients and antioxidants available.

What are high heat cooking oils?

There is some controversy in what is technically a safe and healthy high heat cooking oil. It makes sense that a more stable saturated fat would be more stable at a high heat. Last week, after discussing this topic with the California Olive Oil Commission, they shared that this topic is currently being researched and that they have seen olive oil tested at high heat cooking and the cut off was around 340 degrees Fahrenheit. They also shared that even when food was cooked at a higher temperature, the food itself never reached the high temperature. (Example: When you roast fish in the oven at 400 degrees for about 10 minutes, it reaches a temperature of about 145-150 degrees Fahrenheit.)

Healthline also has an interesting article discussing high heat cooking and the health of cooking oils and fats. 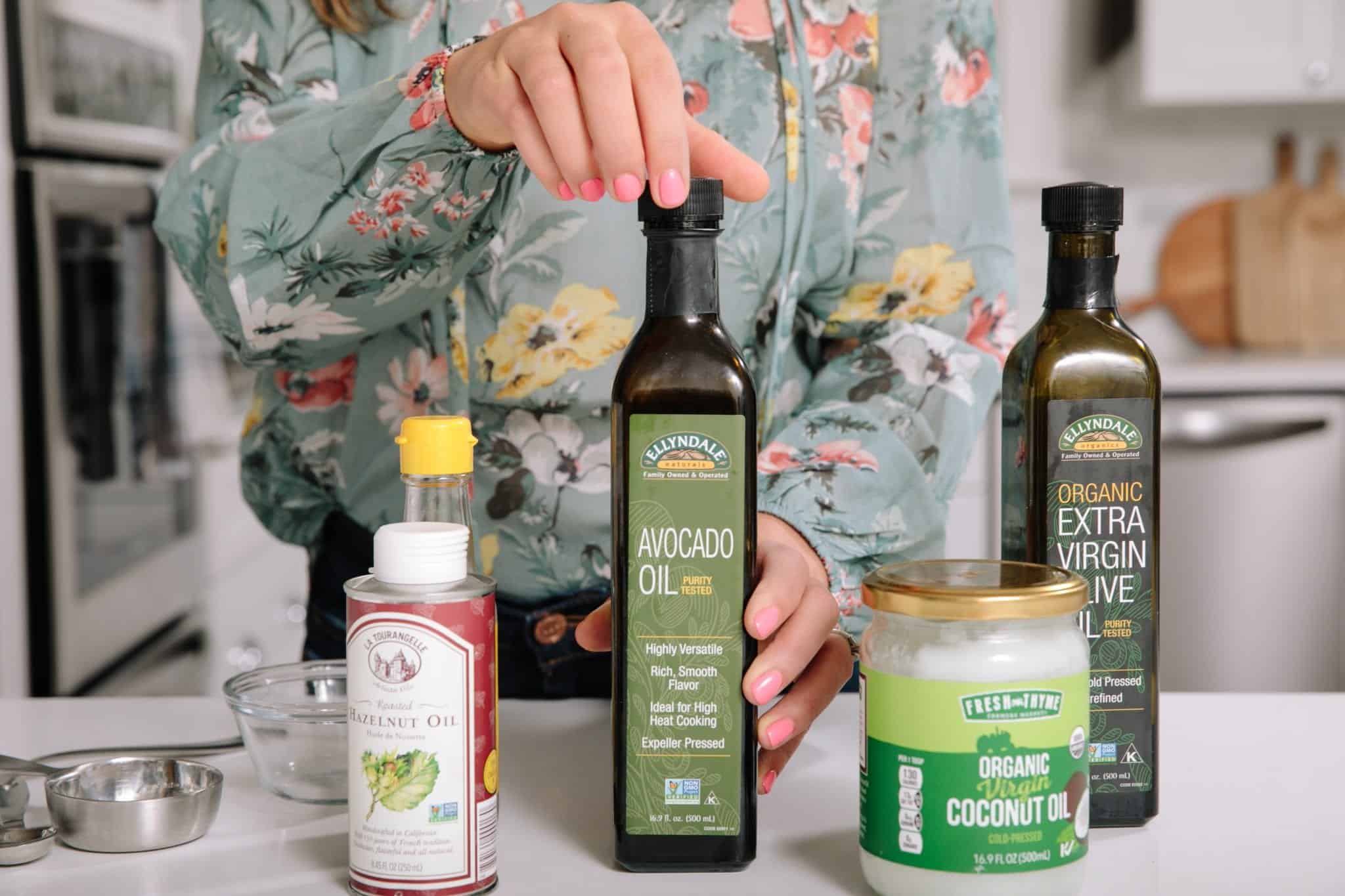 Are vegetable and seed oils unhealthy?

There is some thought that over-consuming omega 6 fatty acids may contribute to the development chronic disease. This is a link to an observational study that thinks there may be a link between high consumption of omega 6 fatty acids and heart disease, inflammatory bowel disease, obesity, and arthritis.

Oils that are higher in omega 6 fatty acids:

How to store oil:

It is best to store oil in a cool, dark place. Exposing cooking oils to light, sunlight, and heat (setting it next to a window or cooking surface) may denature the oil altering the taste, quality and nutrition profile.

When consuming oils (and any food) a variety is best. Vegetable and seed oils contain polyunsaturated fatty acids which are linked to a potential reduction in heart problems, but also contain more omega 6 fatty acids which may be linked with inflammation in the body.

Olive oil is a good source of monounsaturated fatty acids, is lower in omega 6 fatty acids and has been linked with many positive health benefits.

I typically use less stable oils like walnut oil, hazelnut oil and sesame oil as finishing oils and put them on the dish after the cooking process is complete. 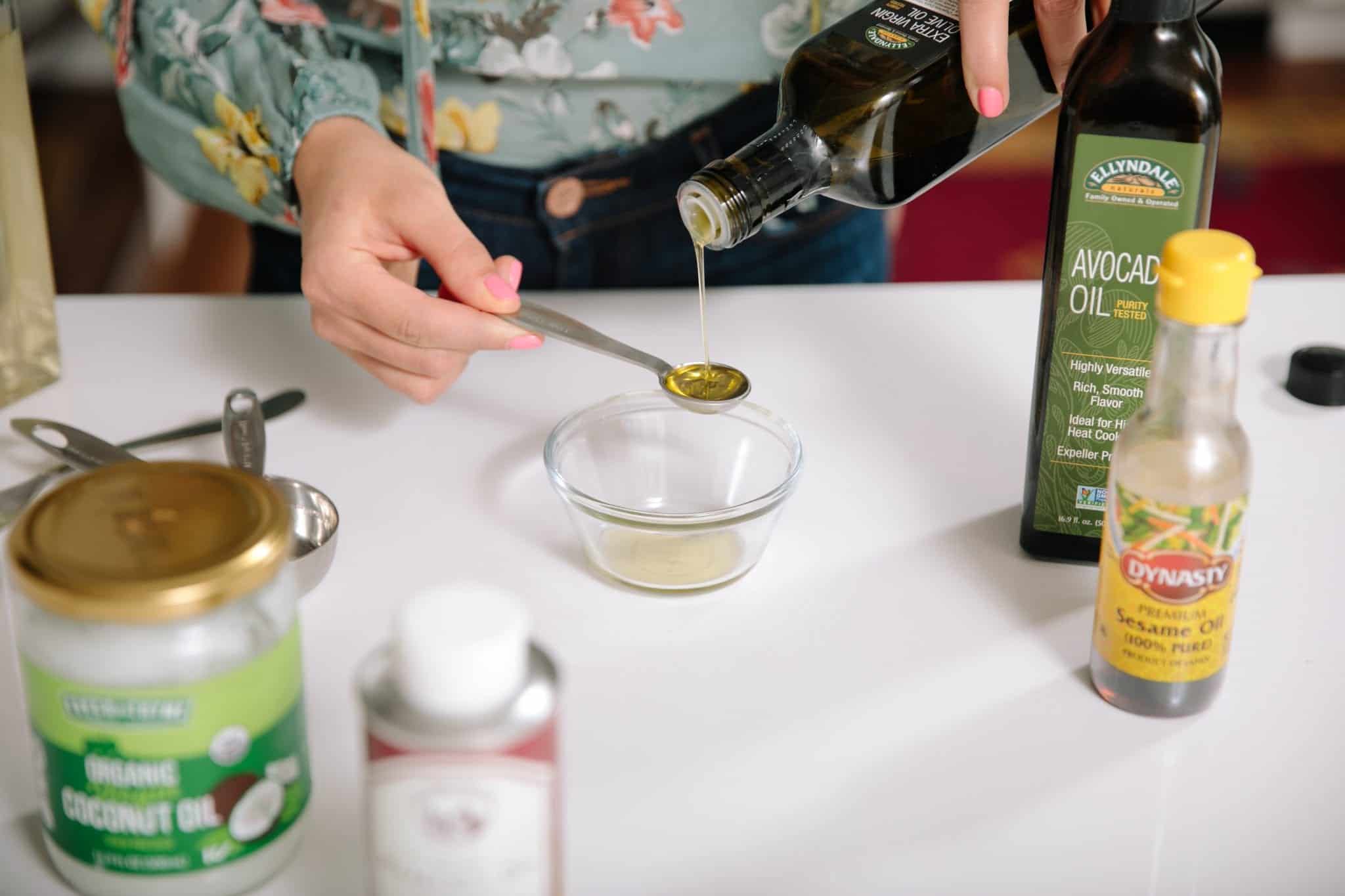