OK, so no post this morning because my morning was rather eventful…but first a picture of last night’s fro-yo.  Even though  I wasn’t 100% loving my flavor combo…I always love Red Mango! 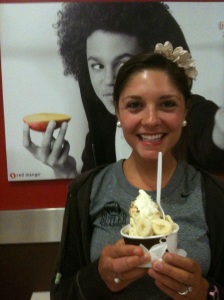 I woke up suuuper early this morning so that I could eat a good breakfast before I went for a 5 mile run.

I had blueberry Chobani greek yogurt mixed with Puffins cinnamon cereal it was yummy and kind of like blueberry cobbler with the berries mixed with cinnamon.  I really like having something crunchy mixed with my yogurt to mix up the textures. 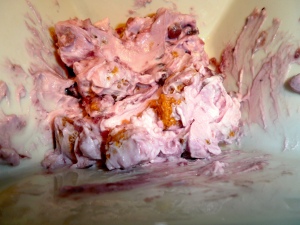 I then let the dogs out and let them run around for a bit since I had to work during the day.  After heading back to the apartment to get ready I laced up my shoes and got ready for my run.  It was an easy 5 miles, nothing too notable about it (except that the BodyGlide really worked!  I then came back to the apartment….and it was locked!!! I had no phone, no key, nothing!

So I walked to the office, and they were still closed for another hour.  I then literally flagged down a women in her car as she was leaving the complex for work and asked if I could borrow her cell phone after explaining the situation.  She was so kind and I was so thankful she let me use her phone.  I went back to my apartment to wait outside the door…I felt like such a dork…why did I not bring my phone or key when I have a spot to keep it in my Spibelt?

Finally, a maintenance man came up to let me in….but he didn’t have the key?!?!?!? I did not understand that, and he didn’t believe me when I told him I lived there because he was looking at the wrong apartment’s paperwork (No I’m not Elisabeth…).

Eventually, I was let into my apartment with 30 minutes to get ready.  Now, I know I have my little trick of being able to make myself presentable after working out without showering, but today that was not the case.  I didn’t shower yesterday, I was super sweaty…not showing was not an option.

I showered, blowed my hair dry, ran a straightener through it, did my makeup, put on a cute outfit, and was out the door in 30 minutes flat…now I think that might be a world record 🙂

I made it to work on time and had a great day helping to “style” clients 🙂 A woman purchased the exact shirt I was wearing because she said that she loved my outfit, and my boss and I helped her to find a pretty necklace to match.

I then came  back to the puppies, took them on a little walk, played with them outside a little and later Brian and I are having a picnic dinner!  I can hardly wait!