I did it…this morning, I “ripped off the band-aid” and got my first team teaching session of Body Pump out of the way.  The first attempt at anything is always the worst, and I find it is best to just do it and get it over with…kind of like quickly ripping off a band-aid.

And guess what, I had a blast teaching live people with a microphone on while standing on stage!  Did I make a couple of mistakes?… of course I did!  But that is why I was team teaching and not full-out teaching the class on my own.  I may have been a little ambitious with my weight selections, but I still got through it, and I am teaching again on Thursday morning 🙂

After teaching, I was more than ready for breakfast.  I actually prepped myself a bowl of overnight oats last night so that I could eat right away when I got home…but Brian ate it!  He thought that I made it for him…I honestly didn’t mind too much that he ate it, but I make my oatmeal a little different than his oatmeal.  He doesn’t exactly like it when things taste “healthy” and I do.  Oh well!

Instead I made myself a very interesting smoothie combination.  A pineapple banana spinach protein smoothie topped with some of my Chocolate PB2.  I know that I only received the PB2 in the mail yesterday, but whenever I get something new to eat I feel like I have to try it immediately! 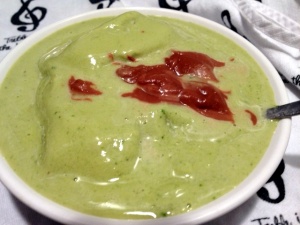 It was interesting, and actually quite good!  I will say, I am LOVING the Chocolate PB2 and can’t wait to formulate some recipes with it!

I then volunteered at the Indianapolis Symphony Orchestra.  When I left to volunteer, it was a beautifully sunny day out, so I decided to walk to their offices, which only takes about 30 minutes.  Well, that was a poor decision because as soon as I was leaving it a heavy down pour of rain began…and I had to take a taxi home!  I felt so goofy riding in a taxi in the middle of the day in my own city, but ya gotta do what ya gotta do!  30 minutes in a  torrential down pour would not have been the smart decision. 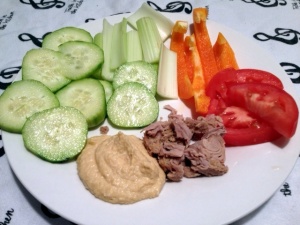 By the time I got home, it was after 1pm and I was pretty ready for lunch.  I whipped up a batch of homemade hummus in the food processor (so quick) and enjoyed it along side some veggies, tuna, and some (unpictured) Greek yogurt.  Tasty, quick, and simple.  Just what I needed.

This past weekend while I was in my training for Body Pump, I made sure to pack myself lunch and adequate snacks.  While I was eating one of my snacks, some of the girls that I had made friends with asked what I was eating. I told them what this tasty little morsel was and rattled off the ingredient list without really thinking anything of it.  Both of their eyes lit up, and they asked where I got the recipe.  “I made it up!” was the answer, and instantly a light bulb clicked in my head that I should make them a batch of this little treat and share the recipe with them. 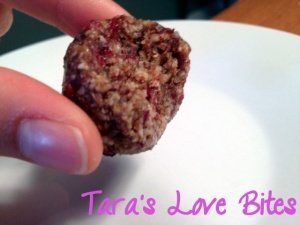 As soon as I got home on Saturday, the first thing I did was whip up a batch of these Love Bites so that I could share them with my new friends 🙂  When they tried them the next day, they couldn’t stop telling me how great they tasted!  It was then that I had the thought of making enough for everyone to try, but it was too late.  At least I got to share the love with two of my new friends. 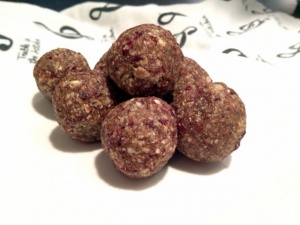 Combine all ingredients in the food processor and process until a sticky mixture is formed.  Roll the sticky mixture into 12-14 balls.  Store in the refrigerator and enjoy!

Question of the day: