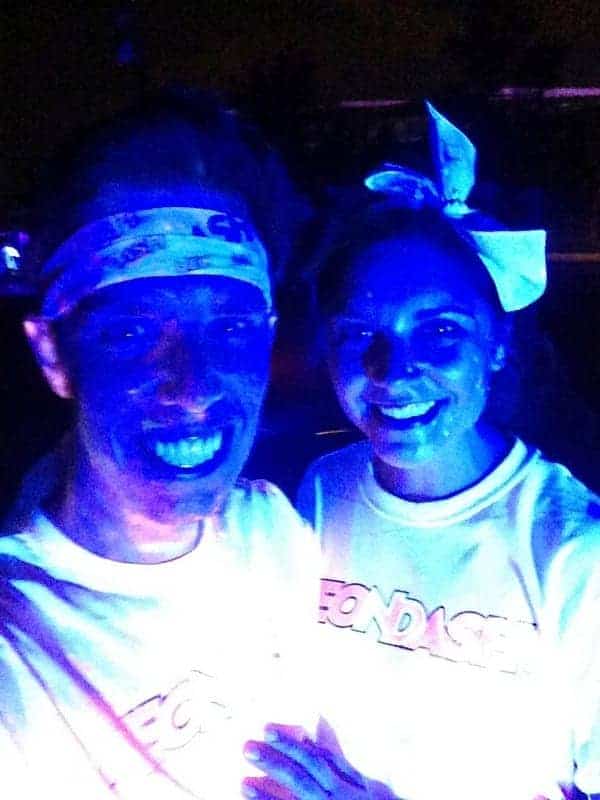 I mentioned yesterday that Brian and I ran our first race in Denver this past weekend, but this wasn’t our typical race.  It was a FUN run called the Neon Dash.

The great folks with Shoelace Events and the Neon Dash reached out to me a couple of months ago asking if I wanted to host a giveaway for free entry to this race and run the race myself.  Seeing that the race was scheduled for our first weekend in Denver, I knew it had to be fate and was excited to accept their invitation.

We never completed a “fun run” before this so we had no idea what to expect.

We showed up early to get checked in for the race and to receive our white shirts and bandanas. 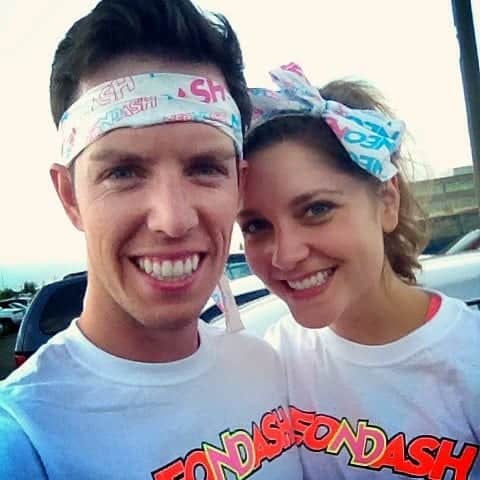 There were so many people!

The race was at Dick’s Sporting Goods Park, which was a brand-new location to Brian and I.  It was a unique racing location for us too.  I’ve only completed races with courses that were through cities with lots of things to look at and see and this location was about 15 minutes outside of the city without much scenery. This didn’t bother us though, because the race would take place in the dark so we wouldn’t see the scenery anyways!

Registration was a little cluttered and there was minimal signage marking where to go, but luckily the event staff was friendly and happy to answer any questions and point people in the right direction.

Brian and I both opted to wear as much white as possible so the neon paint and powder would really show up. 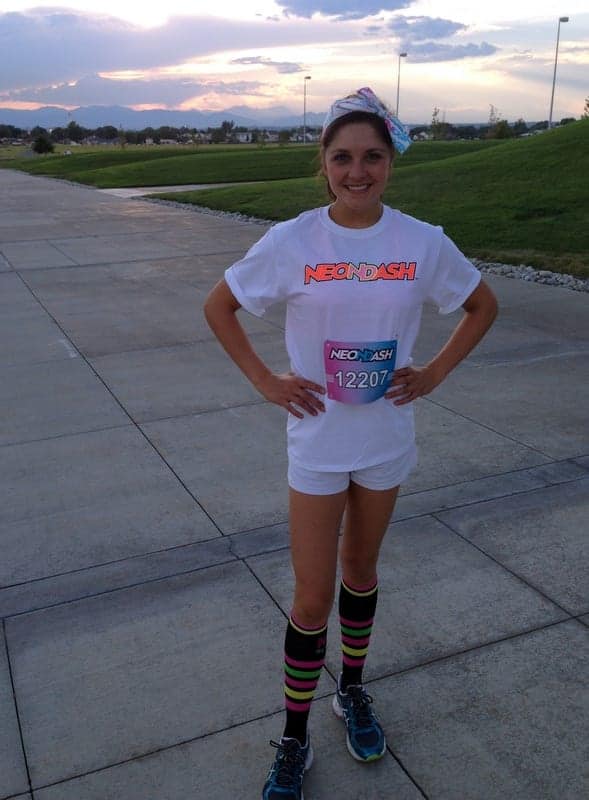 They sold cute black and neon knee socks that were only $5, so I got a pair for the event to top off the outfit 🙂

After checking in and getting changed, it was time to head to the starting line.  The starting line was crowded with families and people of all ages.  It was so cool to see so many families getting active together.  What a great way to spend Saturday night!!

The race was scheduled to begin at 8pm, but the race organizers wanted it to be dark outside so everyone could see the glow of the neon.  As the crowd waited the DJ kept us entertained by encouraging us to take selfies and throwing prizes into the audience. 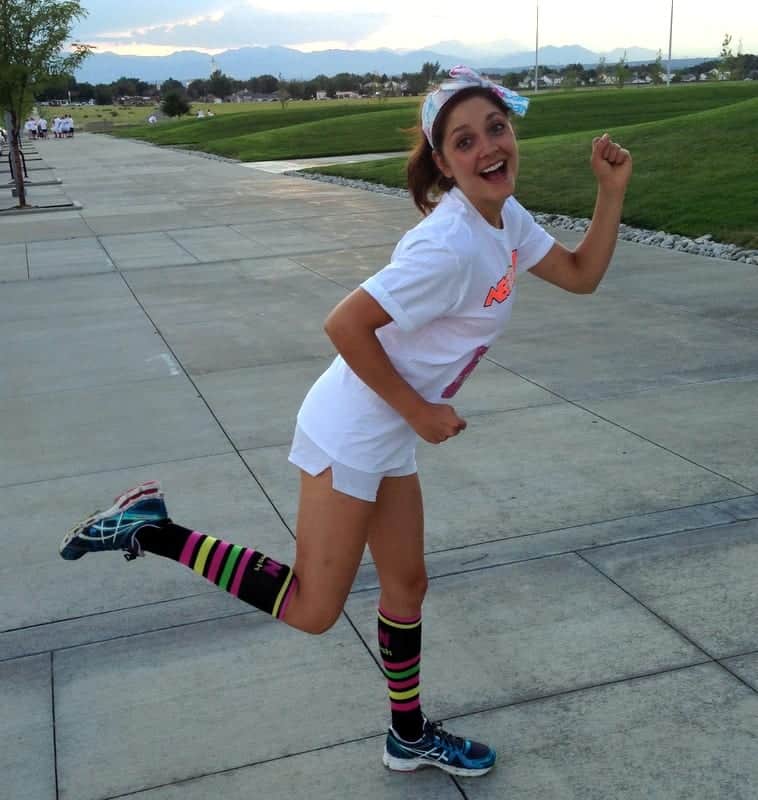 The race ended up starting around 8:20pm and we were ready to go!  Brian and I were in the first wave of runners and as soon as the crowd counted down from 10 to 1 the first wave was off!

While there were waves of people starting the race and lots of race adrenaline in the air, this was definitely a “fun” run.  Time was not being kept and there were tons of families with children, strollers, and people who were walking.  All the walkers stayed to the right and the runners stayed to the left to make sure everyone stayed safe.

The course was 5k or 3.1 miles and there was one drink stop about half way through.  Throughout the course, there were 4 stations with fun music, lights, and either powder or liquid neon paint that got splashed onto racers as they passed through.  I didn’t bring a phone or camera through the race for this reason. I didn’t want it to get wet!  Sorry for no “during the race” photos.

Brian and I ran the entire race together and were among some of the first people to finish the race because we started out in the first wave.

When we were done running, we immediately ran to the black light so we could see the neon glow. 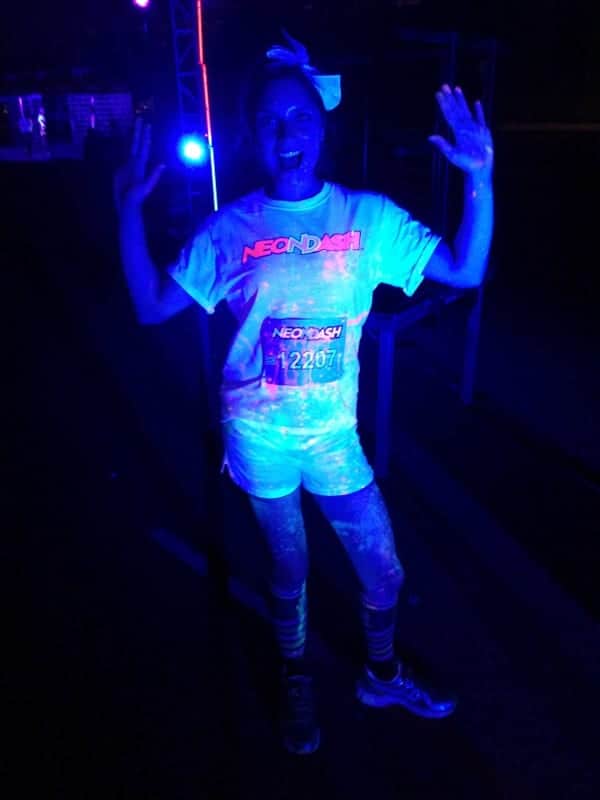 We were thankful we brought a change of clothes to wear, because some of the paint was still wet and would have gotten all over the inside of the car.   A towel to sit on would have been a good idea too, but changing out of our neon covered clothes worked just fine.

Overall, it was a really great fun, family race and we were happy to be part of it!  I really loved running in the dark at night (which is something I don’t usually do), I loved getting splattered with paint, and I loved seeing all the families do this race together.

After reading about some other post-race dance parties on the Neon Dash blog and other healthy living blogs, I wish our party was a little more happening so we could have had that experience too BUT after a week of moving and adjusting to the altitude Brian and I were both tired and ready to go home after the race 🙂