Before running around town with Sarah and Jeremy today, we stopped by Taste which is a cute little restaurant that is pretty close to their house.  I had been there twice before, and Sarah had been there before with her parents, but Jeremy had never been.  We convinced him that there would be something there for him to eat by telling him about the Pomme Frites (French Fries) and how delicious they were.  Once he tried one, he agreed that they were delicious and just couldn’t stop eating them!

I had a delicious salad called the V-8 which was mixed greens, shredded carrot, edamame, green beans, corn, tomato, asparagus, and red onion with a dijon sort of dressing.  All of the fresh veggies had so much flavor, it barely needed the dressing!

After lunch, we headed out to run some errands and just hang out.  We got home and walked the dogs and next thing you know it was time for me to leave.  I came home, and Brian and I were both ready for dinner so we headed down the Canal  to a little restaurant called The Left Bank.  The restaurant is literally right on the canal.  We sat outside so we could watch all of the walkers, runners, and passersby.  It was hot, sunny, and summery…just what I like.  Brian’s mom bought us a coupon on restaurants.com, which helped make our decision to eat at The Left Bank, but it was totally worth it.  We started with a baked bre appetizer with a fruit chutney on top.  The spices in the fruit were a little “fall-y” tasting for me, but it was still delish! 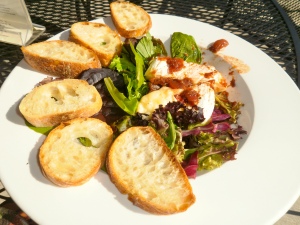 To drink, I had a bloody mary.  Most people think of this drink only as a drink for Saturday morning to cure a hangover, but I like them anytime.  The mix that they use at Left Bank is native to Indianapolis called Hoosier Momma (how cute is that!)  It is gluten free and all of the ingredients are natural and from Indiana. 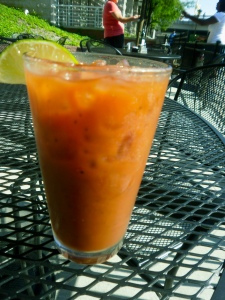 For the main meal, I had a dried fruit and blue cheese salad with balsamic dressing.  It was very yummy, but I thought that spiced pecans really would have taken the salad up a notch. 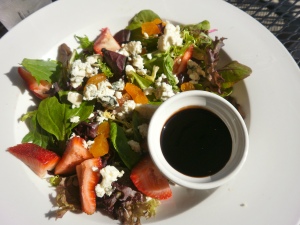 Brian had a portabella mushroom sandwich with spicy chips on the side, and he ate every last bite! 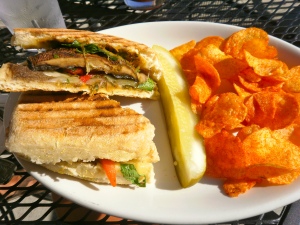 It was nice to go on a mid-week date, which is something we rarely do.  Although I love cooking dinner and experimenting in the kitchen, it is nice to have a break sometimes. 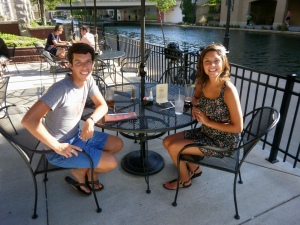 So, who is going to Harry Potter tomorrow night?? I am, so I have to hit the hay waaay early tonight!!