Meeting with the florist earlier today was amazing!  I actually found her on The Knot and realized that her shop was near an area right by Butler that I had been to several times.  After talking with her for a while, I found out that she graduated from Butler with a degree in Arts Administration too!  Instant connection.

She said that she will be sending me a quote this weekend, and I know that it will be a hard decision between this florist and the first one that I met with.  Should I take personality and the “vibe” I got from each person into account?  I suppose I will deal with that when the decision needs to be made.

Tonight’s dinner was a newbie!  I have read several recipes made with tempeh, but I never actually understood what it was and was a little nervous about trying it.  After doing a bit of research, asking a couple of questions, and finding an approachable recipe, I purchased tempeh and decided to give it a go.

If you have never heard of tempeh, tempeh is a cake made of fermented and cultured whole soy beans.  It has a higher content of protein, dietary fiber, and vitamins than tofu.  Although it has a pretty earthy flavor on it’s own, it really picks up the flavors of the ingredients surrounding it. 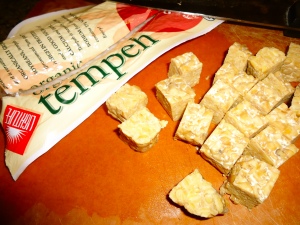 I used a recipe from Clare on Fitting It All In for Garlic Soy, Eggplant and Zucchini.  The recipe was simple, easy to follow, and a great introductory recipe for tempeh! 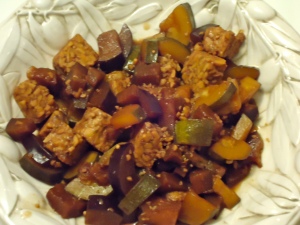 It had a slightly soy sauce flavor, and the vegetables were cooked to the perfect tenderness.

I am now relaxing, watching the Food Network, and in desperate need of painting my nails. 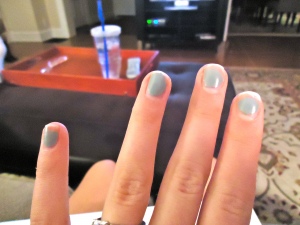 EEK! I haven’t painted them since Chelsea’s Wedding!!

What new ingredient have you used lately??