I woke up today ready to run!

I started out with an overnight bowl of oatmeal with peanut butter to give me fuel for my final long run of training. 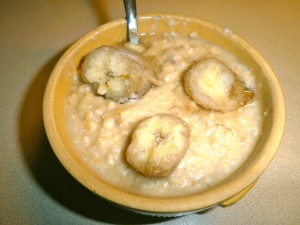 My mom is part of a walking group, and today they were walking 6 miles so I went with them to see what I could do.  Originally, I thought that I was going to do the 6 mile loupe twice and possibly walk the last mile since 11 miles was on the schedule for the day.  I ended up finding a group of runners that were doing the half marathon loupe so I joined up with them!

I started off running right behind another girl that seemed to have a pace pretty similar to mine.  After about 3 miles I lost her and was on my own.  There was a group of three people a ways in front of me that I had been following for the entire run as well.  Although the trail was marked, I still didn’t really know where I was going so I told myself to stay behind them the entire time.  After getting to about mile 8, I caught right up to them!!  My pace was under 10 minutes the entire time, which is faster than usual for me on these long runs 🙂  When I caught up to them, they realized they didn’t know where they were going and I didn’t know where I was going either, so we stuck together in order to figure it out.

Throughout my training for the half marathon I have been doing my long runs (well all of my runs for that matter) by myself just listening to my iPod.  Once I started running with them, I turned off the iPod and I was surprised by the fact that I was able to carry on a conversation after running nearly 10 miles!  It was great to have company, especially experienced company that pushed my pace a bit.  After talking for a while, we realized that I went to high school with the son of one of the men and he is dating one of my best friend’s from high school’s younger sister….small world!!

I opted not to walk the last 1 or 2 miles because I was feeling so great.  Colin (one of my new friends) and I sped up a little bit faster than Len and Tiffany (the other two running friends) and finished with ease. 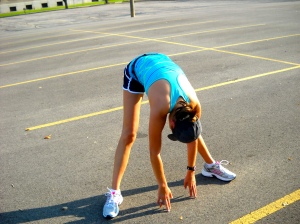 I then stretched out, and made sure to do a good job of it because jumping from 10 miles to 13 miles is a big leap, but I know I will be in good shape for the race next Saturday.  Good news though…no chafing!  Thank you Body Glide!

I felt pretty good afterwards and came right home to shower.  After showering I started blow drying my hair, and then suddenly I just did NOT feel good.  I didn’t eat right afterwards because my stomach felt a little strange and I didn’t want to upset it, but I think that was a bad idea.  I made myself a little glass of chocolate milk to replenish my body with blood sugar and protein, but that just didn’t quite do the trick.  I layed down on the couch to just close my eyes and try to  cool down.  I think the blow dryer overheated me.

My mom then gave me raisins, peanuts, and chocolate chips along with a fresh glass of ice water…just what the doctor ordered!!

Now, mom and I are off to the grocery, picking up my brides maid dress (!!), hopefully replacing my camera, hitting up Taste of the Arts in downtown Fort Wayne, Chelsea’s open house, then Chelsea’s bachelorette party!! Should be a fun and busy day 🙂