On April 2, 2011 I was proposed to by the love of my life, Brian. Boy did he surprise me! Earlier in the year, around January, one of our mutual friends sent me a message on Facebook asking Brian and I to be models for her in a photoshoot that she was entering into a contest on a wedding photography blog. I thought nothing of it because Brian and I had taken photos with her to help her build her portfolio earlier in the year, and we had such a great time doing it I didn’t think twice about saying yes! So there it was, I had the date April 2 marked on my calendar for 4 months and had no idea what was in store. As the semester went on different things began coming up on the weekend of April 2, it was my sorority’s parent’s weekend, the women’s a cappella group I was in had a performance, it was the weekend of Butler’s Top 100 Student’s recognition banquet, and Butler was playing in the Elite Eight March Madness basketball game. With all of this going on, my parents were coming down for parent’s weekend, and my grandparents “just happened to be in the area” and came for the weekend’s festivities as well. I was CLUELESS!!!

Friday night we had the Top 100 Banquet and Brian was able to meet my grandparents for the first time. Saturday, Brian went to “study” while I went to my sorority with my family for parents day. Our parent’s day was great and my women’s a cappella group performed for all of my sorority sisters and their families. I was having such an amazing weekend, but I was worried about one thing…where was I going to watch the basketball game!!! The whole week I had been trying to get my mom and grandparent’s to stay and watch it with me, but they kept telling me they had to get back home to Fort Wayne to take care of our dogs! Brian seemed to not care very much about what we did for the game, so I was stuck! My family left the sorority parent’s day early so that Mom, Dad, Grandpa, and Grandma could go take care of the dogs and Brian and I could go do our photoshoot! We said goodbye to my family and Brian and I got all dressed up. We headed down to Holcomb Gardens, which is a really pretty and romantic spot on Butler’s campus, and Caroline (the photographer) was waiting for us! We started out just walking and talking and acting “natural” when she told us to go by the gazebo. The gazebo has always been special to Brian and I because that is where we said “I love you” for the first time. So there we were standing there and Caroline says “Just pretend like I’m not even here!” Apparently, that was Brian’s cue….however, I was still in the dark about the whole plan so I was asking him about how studying went earlier. All he could say was “I love you, I love you so much.” I was a little confused as to why he kept saying that rather than having a goofy conversation, when next thing you know he is saying a speech about how he told me he loved me at that gazebo two years ago, and then he was down on one knee and pulled out the ring and popped the question!!! I could not believe what was happening! Of course Brian and I had talked about it, but I had no idea when he was actually going to do it. Caroline was there documenting the entire thing! 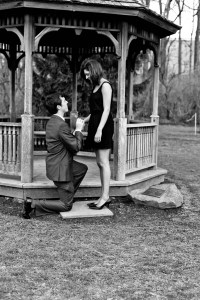 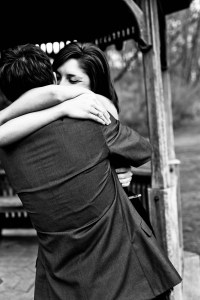 After the initial excitement, he told me that there were more surprises and not to ask any questions. I love surprises, but I hate not being in the know about what is going on! So we packed overnight bags (I had no idea why) and went downtown. I figured that we were meeting Brian’s family for dinner as a celebration. We arrived downtown and went to Buca di Beppos, an Italian restaurant. As we walked in, I was not only surprised by Brian’s family, but my family was there too! Mom, Dad, Brenna (my sister), Grandma, and Grandpa! This was the reason that everyone came for the weekend, not because of my awards banquet or to visit my sorority!!! It was amazing.

Kate, Brian’s mom, decorated our little room in the restaurant beautifully! There were engagement balloons, diamond ring napkin holders, and nametag buttons for everyone that said things like “Mother of the Bride” and “Best Man.” It was perfect. After dinner, Brian surprised me again with a room at the Conrad, the nicest hotel in town, for the night! We were able to watch the game from our room…Butler won! After the game, Brian’s friends were all waiting downstairs at the wine bar to congratulate us! 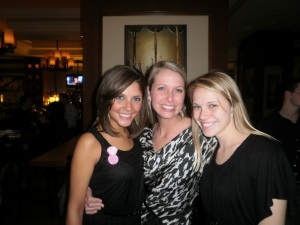 Sunday morning, we met with my family for breakfast downtown at one of my favorite restaurants, Patachou, before telling them goodbye…for real! There was still one more surprise in store though, a couple of weeks before hand my entire pledge class in the sorority was invited to be part of the party for a “Candlelight.” In my sorority, a Candlelight is held when a boy in another fraternity decides to lavaliere his girlfriend which means that she is able to wear his Greek letters and is on equal status with his brothers, and when a girl is announcing her engagement. No one had any idea who the Candlelight was for, but it was for me!!!!! Brian arranged for all of us to go out for drinks before announcing it to the entire sorority. I had always wanted to have a Candlelight, and it was a perfect and special way to tell all of my friends and end the most amazing weekend. 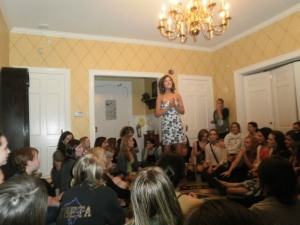