Because I didn’t go grocery shopping last night I decided to make up a batch of my mom’s zucchini bread.  Zucchini bread is great in general, but for some reason this recipe is just a little moister than the rest, sweeter than the rest, tastier than the rest, and in my opinion THE BEST!  When I think zucchini bread, I think of summer and my mom bringing home zucchini’s that were literally feet long and about 5 inches wide from one of her friend’s gardens.  We would have zucchini at every meal for weeks. 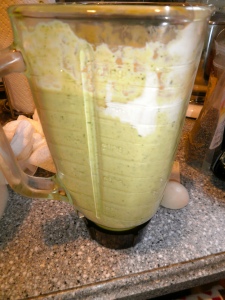 I think it has to do with the fact that the zucchini is literally  blended up in a blender.  I was a little nervous that the recipe wouldn’t turn out because I had to substitute Greek yogurt for oil…but it was delicious!  And I think I like using Greek yogurt better than oil now 😉 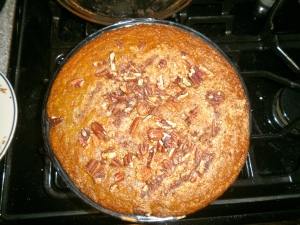 For breakfast I had a piece topped with peanut butter.  The bread was perfectly moist with a touch of cinnamon, and the peanut butter complimented it well.

Now, I am off to the grocery store to pick up some fuel for the next two weeks 🙂