I did not post this morning because I literally woke up at 3:55am (ahhh!) so that I could drive back to Indianapolis to work.  I tried to document my breakfast, but when I turned on my camera it made a weird buzzing noise and the lens was stuck out and I couldn’t take any pictures on it or turn it off!  So here is an old photo that resembled my overnight oats made with oats, peanut butter, cocoa powder, water and splenda. 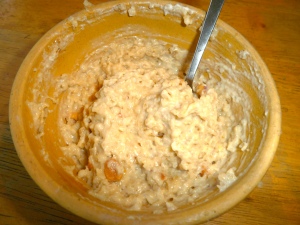 Once I arrived in Indy I quickly charged my camera because at the family reunion I explained some camera issues I had been having to my grandpa and he thought it was because the battery was worn out because I use it so much.

When I arrived home from work around 2:15pm I was staaaarving.  There was food at the event I was working at but it was all pizza, greasy, and fried stuff I just wasn’t in the mood for so I hadn’t eaten since 8:30am, which for me is a long time.  I made myself a little veggie tasting plate similar to the one my mom made me yesterday but it was just veggies, Laughing Cow Light Swiss Cheese, and salsa.  No crab or crackers 🙁  I went to take a picture of it, and my camera was still acting funny!!!

I then read some trouble shooting articles and one said to remove the battery and the memory card.  So I did that, and after I put them back in the camera worked….for like a second!!! So I am stiiilllll trying to figure this whole camera thing out.

I actually don’t have too much planned for the rest of the night which feels great!  I can finally do some things that just keep getting pushed back on the never-ending list.

I think Brian and I are going on a bike ride later.  I can’t wait!