Last night, Brian and I had an amazing secret date night.

Over the past month, with me starting a new job, Brian traveling, and both of us just being plain old busy we haven’t been able to spend as much time with each other as we would like.  To solve the problem, a couple of weeks ago, I started brainstorming and came up with the perfect summer date night….and somehow I was able to keep it a surprise!

As soon as I was finished with work, I changed into some shorts, hopped in the car, and headed to pick up Brian.  He literally had no clue as to what we were up to.

I had packed a picnic dinner and since timing wise I was a little later than I had originally planned and I was starving…we ate in the car while driving to the destination.

Once we arrived downtown I needed help finding a parking spot, so I had to spill the beans.  We were going to our first Indianapolis Indians baseball game and staying the night at the Crowne Plaza Downtown Indianapolis Union Station hotel.

He was so surprised and excited!

We had been talking about going to a baseball game since last summer, so I just knew that I had to buy the tickets otherwise…we would probably still be talking about it.  The Crowne Plaza is a hotel downtown within walking distance of Victory Stadium, where the Indians play, and has a ton of history!

The hotel used to be a working train station, and it still has the “train station” feel.  Some of the rooms are even inside of train box cars. 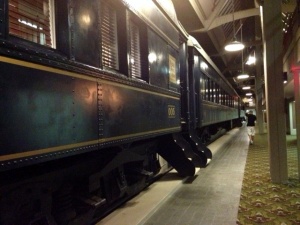 After finding a parking spot (thanks for the help Brian!) and dropping off our bags to the hotel room, we headed out to the Indians game. 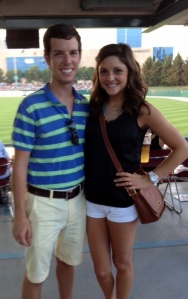 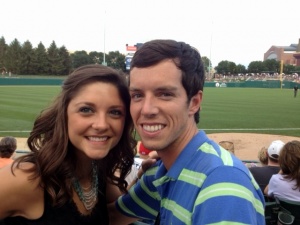 Since I was not familiar with the stadium, or to be completely honest the  seating arrangements of baseball, I just tried to get us seats as close as possible….When we went to the location of our seats, we were shocked by how close to the action they were!!! 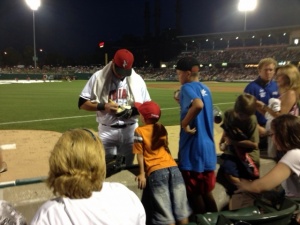 I absolutely love baseball games in the summer. To me, they just scream summer time!  The weather was perfectly warm with a nice breeze, no rain in sight (thank goodness!) and to top off the night, the game ended with fireworks.  Perfection!

As we were walking back to the hotel after the game, we notice a guy on a bike with a little wagon on the back labeled Circle City Pedicabs.  I had seen these types of bikes in other larger cities like Chicago, New York, and Washington D.C., but they are very new to Indianapolis.  Brian and I had never ridden on one…so we decided to give it a try.  For only $5, it was definitely worth it! 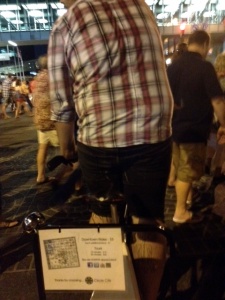 Not only do they offer downtown transportation, but they also give city tours…too bad Brian and I aren’t from out of town, otherwise I totally would have taken advantage of some commentary 😉 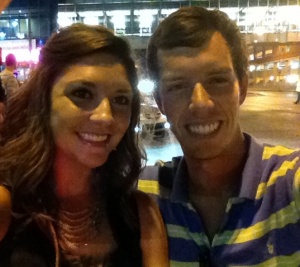 It was a great surprise date night, and I can’t wait to come up with the next surprise!