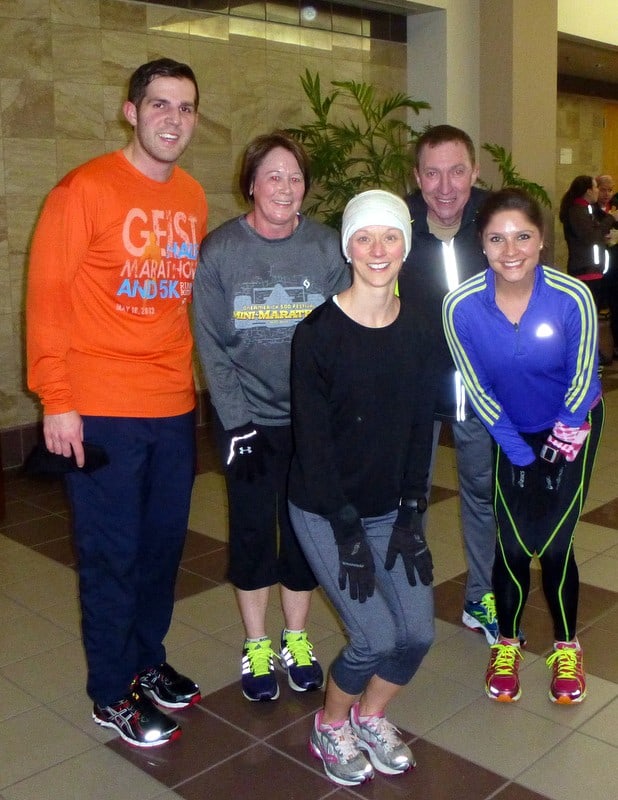 Last night was our 4th group run for the Mini Marathon Training Program, which means we were up to 7 miles.

I brought my camera along with me this week, inspired by Anne to take some running photos to show you where we went! 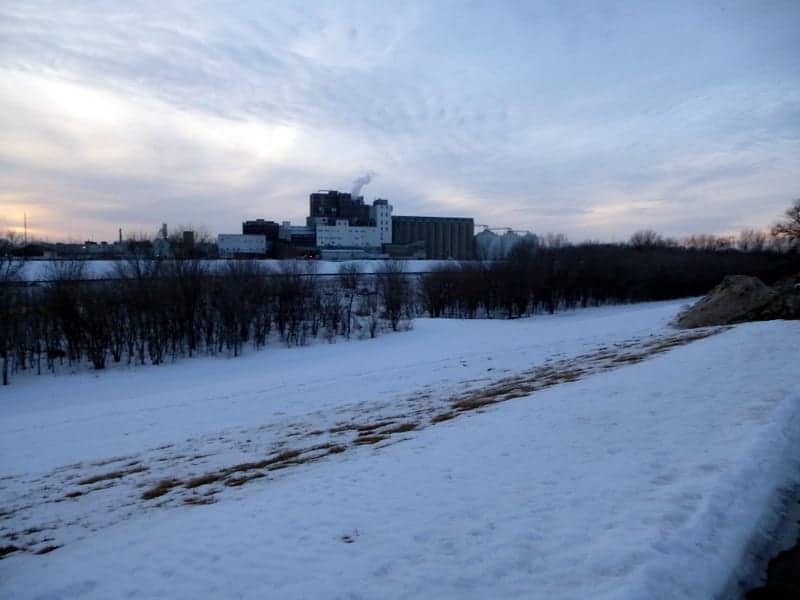 The weather was MUCH warmer than it has been in Indianapolis recently, I think we were at about 42 degrees when we started the run.  The past couple of weeks have been below freezing, so we were all excited to hit the pavement in some warmer weather.

The warmer weather was great for body temperature, but it really made the roads slushy and dirty but we powered through!  While I really love running outdoors, this mini marathon training has definitely taken me outside on days I probably would have stayed in.

We started at NIFS and ran along the White River up to 10th Street. 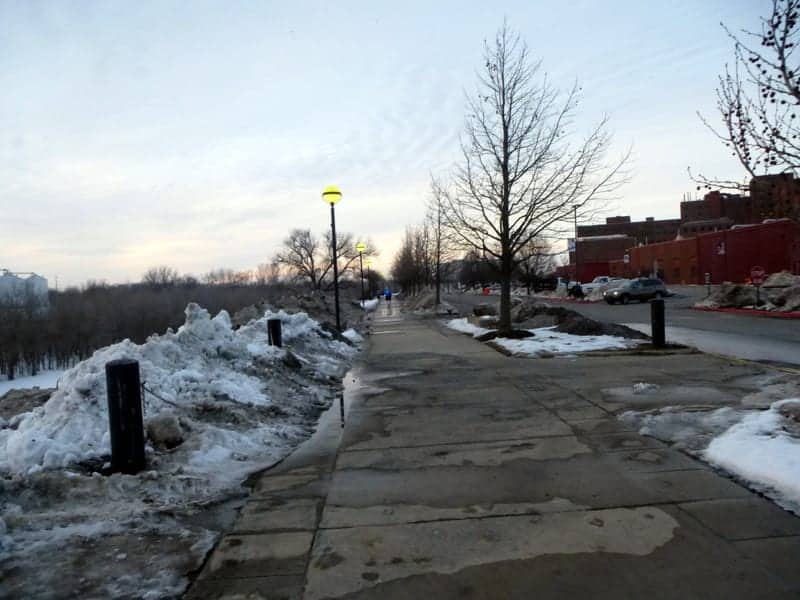 Once we got to the 10th Street bridge, we were all pleasantly surprised with the clear sidewalk.  So far so good with our run. 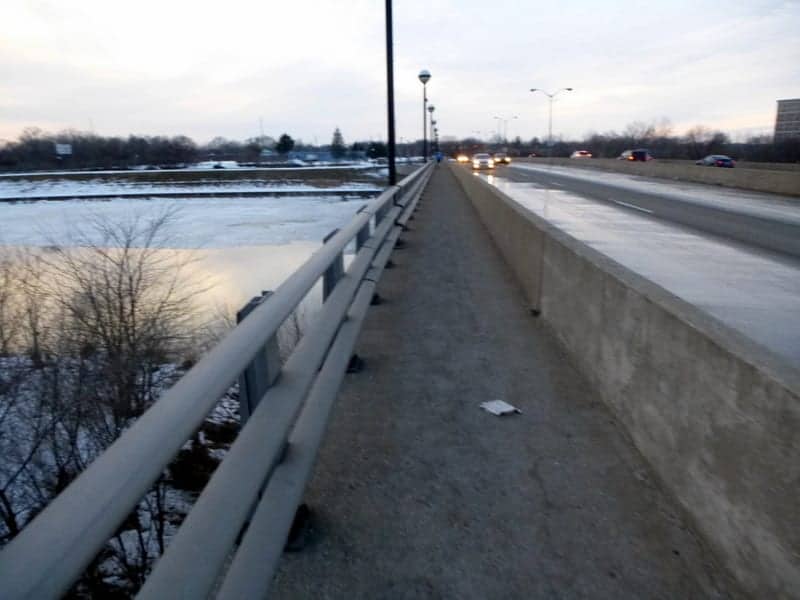 When we got across the 10th Street bridge we headed back towards the city on the other side of the White River.  I absolutely LOVE running towards the city along the river because of the amazing Indianapolis skyline view 🙂 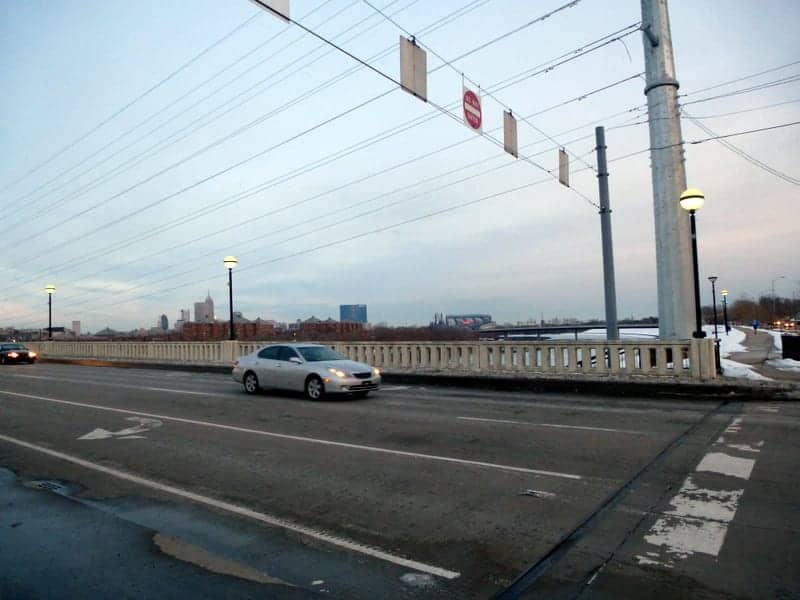 As we crossed the New York Street bridge we had our first true experience with “snirt.”  Now, I had never heard of “snirt” before last night, but one of my running group participants explained that “snirt” is snow covered in dirt…and that is exactly what we had here!

Luckily, we were able to run in the bike lane. 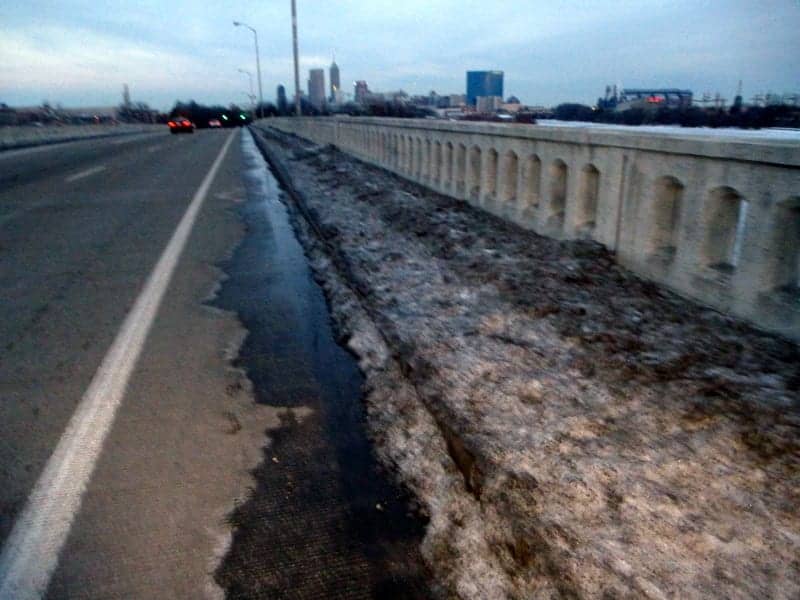 We continued to take New York Street onto IUPUI‘s campus, and while we were clear of much of the “snirt” here, there were some pretty huge puddles we ended up running through.  Wet socks for all of us! 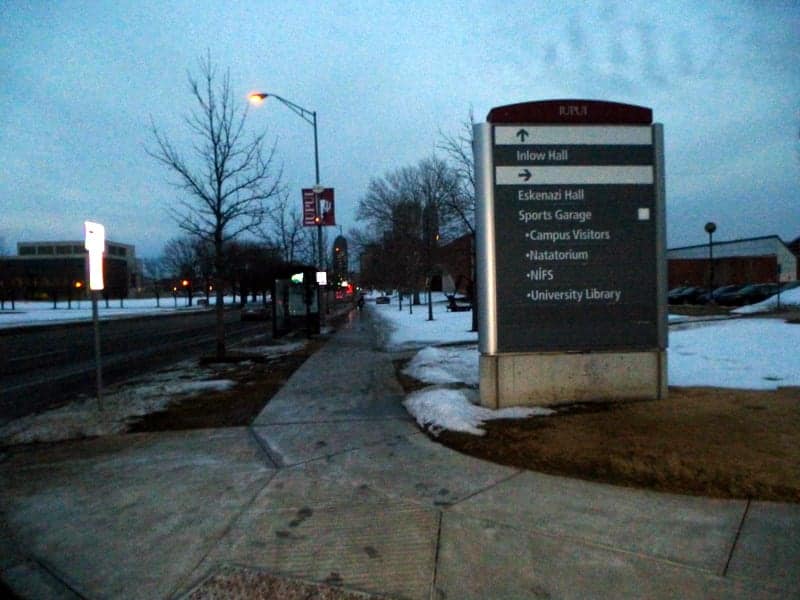 As we came up New York Street, we turned right onto West Street.  Here is a little insider tip:  Apparently, when running toward Lucas Oil Stadium, the sidewalk on the Left side of the street will always be more clear when trying to avoid snow. 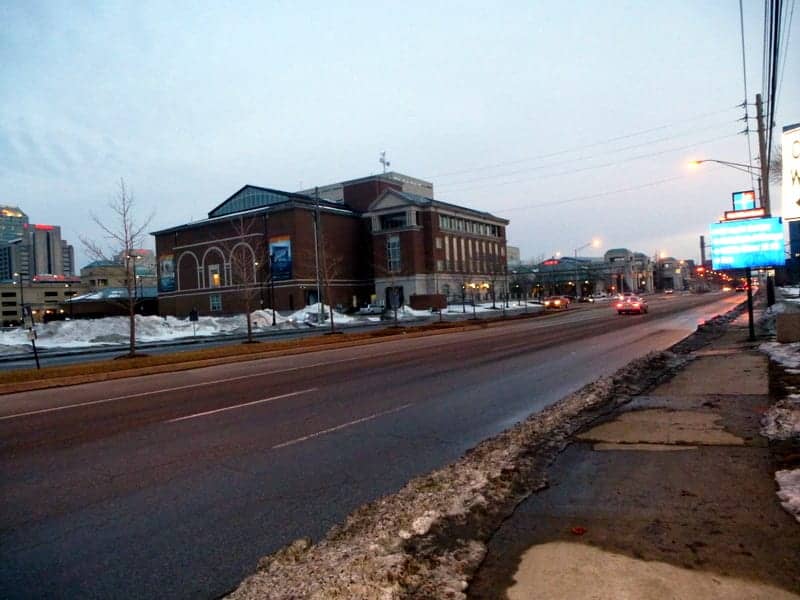 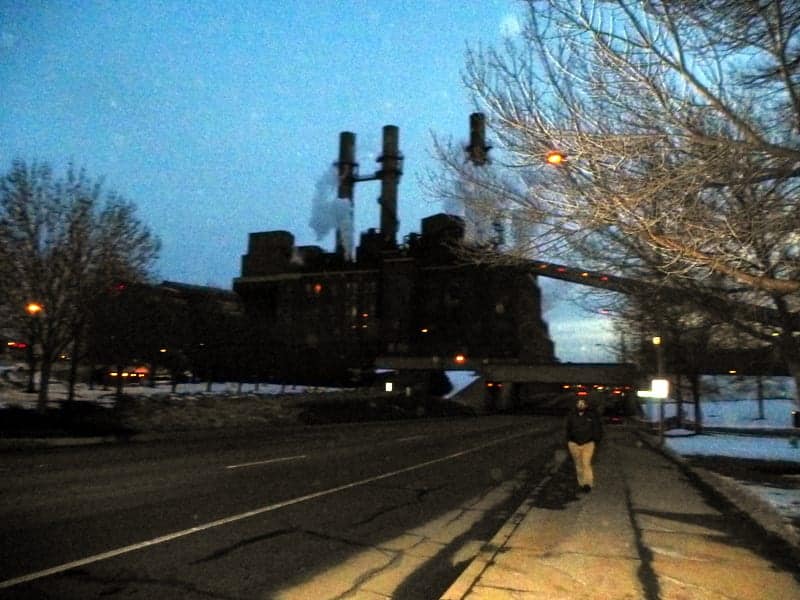 We ran all the way up West Street and finally turned left on Oliver to take us around Lucas Oil Stadium (home of the Colts!) 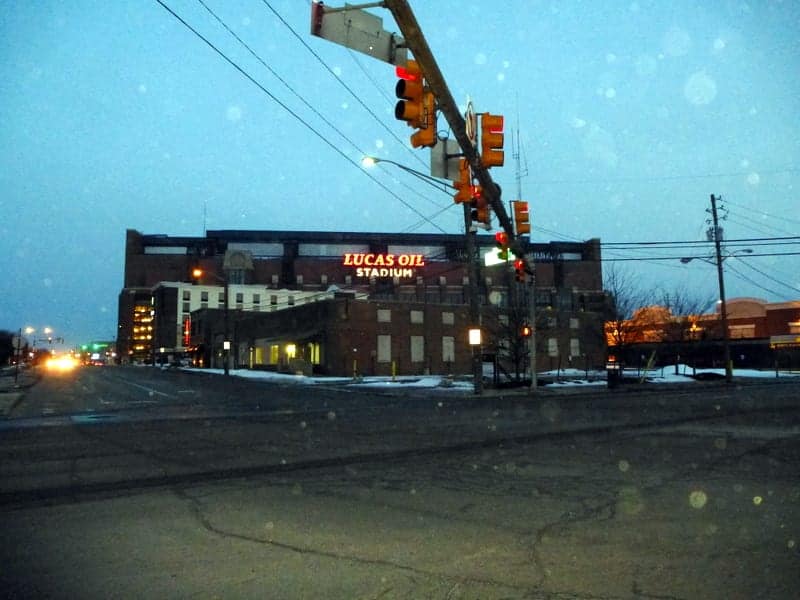 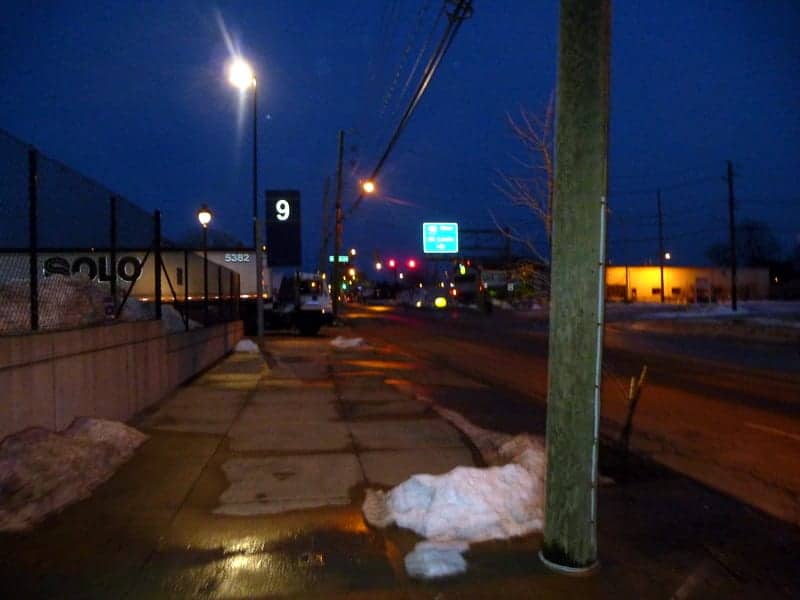 After running up Oliver, we turned right on South Capitol Avenue to run on the other side of Lucas Oil and go past the convention center.  The streets were pretty clear here too! 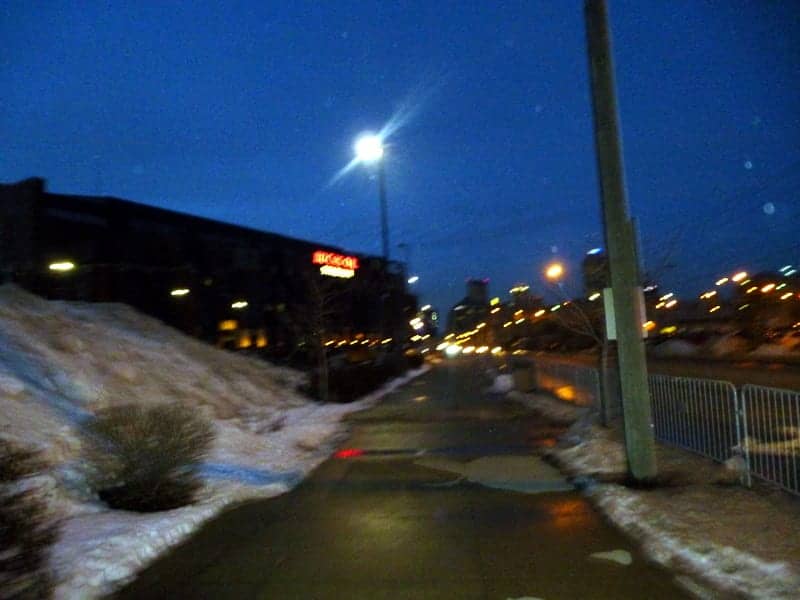 The next turn we made was onto Michigan, so we could head back to NIFS, and by this point we all had soaking muddy feet and were ready to get home!!! 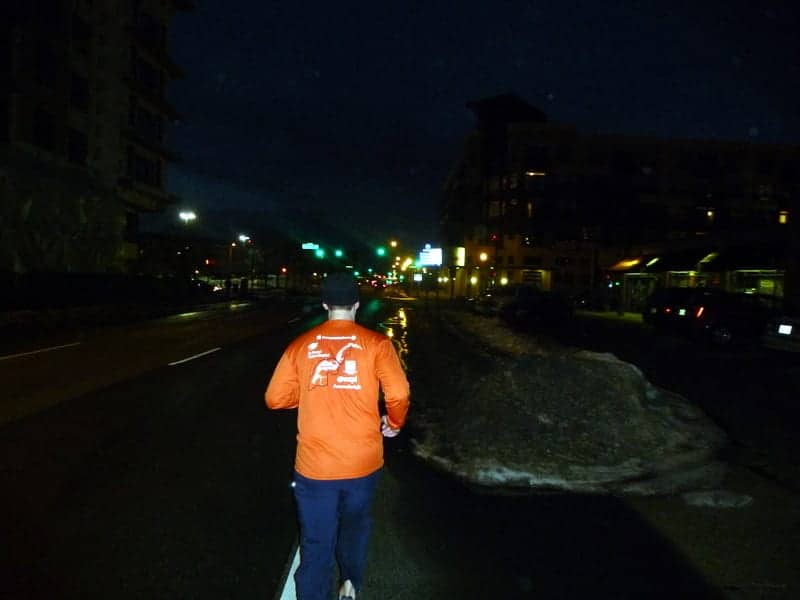 We finished our 7 miles with an overall pace of 8:33, but one of the other runners in my group clocked our last mile at 7:08…I guess we were all more than ready to be done with the run!! 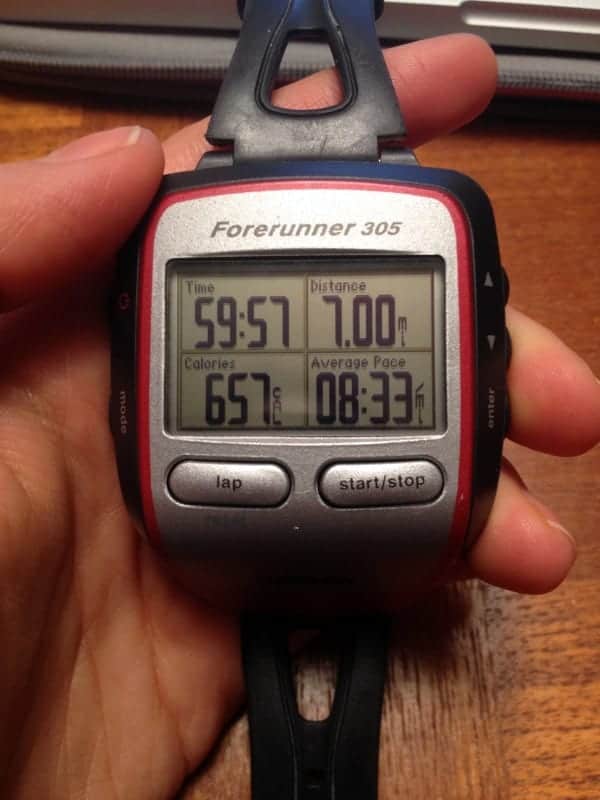 Despite the muddy, dirty snow it was a really great run!  We were able to see different views of Indy and there weren’t too many stop lights.  I love city running, but sometimes the stop lights can get a little annoying.  This run had minimal stop light breaks 🙂

Everyone in the group liked the route too, and next week we are doing another 7 miler.  The group voted and they all think this route is here to stay.  I am totally fine with running a route more than once, because I am severely directionally challenged and it takes me a couple of times to know where I am going!

Brian had a sweet potato for me in the car, thank goodness! I was starving!

When I got home, I heated some salmon cakes and ate them alongside some celery and carrots dipped in coconut butter.  Sounds weird, but I promise it’s delish. 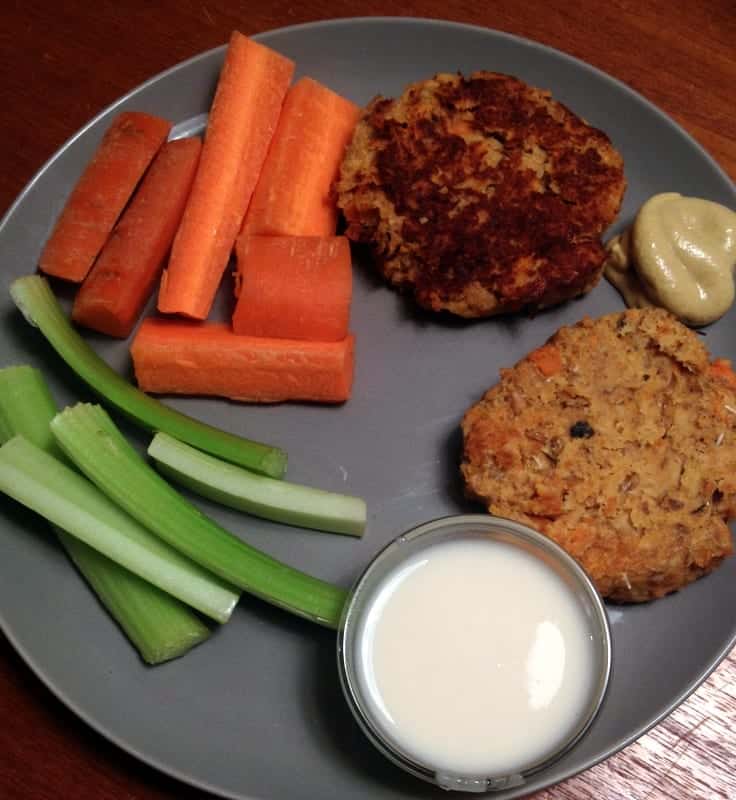 I’ve never looked at my splits after running, but since we are repeating the route and the mileage next week I am going to set up my watch to clock our splits.  I’ll be interested to see how consistent our pace is.

So glad we got another great run under our belts!