I am officially here and safe.  I arrived around 10am this morning, which was around 5am Indiana time.  Brian’s cousin, Michele, picked me up from the airport and carted me around the city. 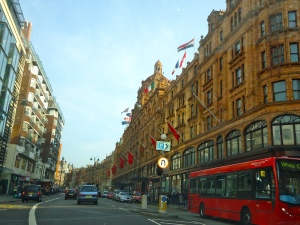 She drove me past all of the famous sites, which only made me hope that I get a little down time to see at least some things.  It really looks like the movies.  The buildings are almost all cute and quaint, with a “London” feel. 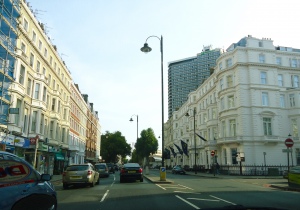 Since I had to dump my toiletries, I had to purchase all new products today.  Things here seem so cheap, but really they aren’t.  Dove body wash was on sale for 1 pound, but when I saw the sign I couldn’t help by think $1!! Still a deal, but more expensive than $1.

After driving around, Michele and I went to lunch at a little restaurant in a shopping center called Westfields which is basically like a mall.  We both ordered the goat cheese salad with roasted peppers, butternut squash, pine nuts, and a pesto sauce.  It was amazing!! 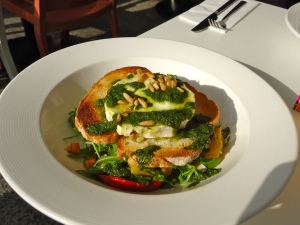 We then drove around a little more to find my training academy and the YMCA that I am staying at.  The training facility looked great, but the YMCA is very much like a dorm.

I have three roommates, two are from Ireland and one is from Spain.  So far, they all seem really nice and the two from Ireland and I are around the same age.  My roommate from Spain is actually 29, but she doesn’t look that old at all!  I would have guessed my age for sure.

After settling in a little and chatting with my roomies, I went down to the cafeteria to eat dinner.  Since my schedule is totally off, I wasn’t too hungry.  I have also never been a fan of cafeteria “heavy” gravy type meals.  My meal on the plane wasn’t too great either.  I just had the sides, but since it was 10pm at night I wasn’t too hungry.  I saved the little roll for my “breakfast” at 3am!  What a crazy schedule! 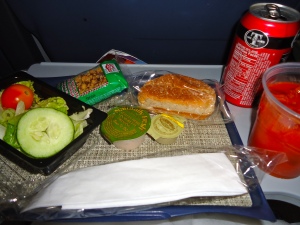 I then Skyped with Brian to keep me awake a little longer so that I could kind of have a regular sleep schedule.  I was for sure in bed by 8pm.

Wish me luck in my first day of training!